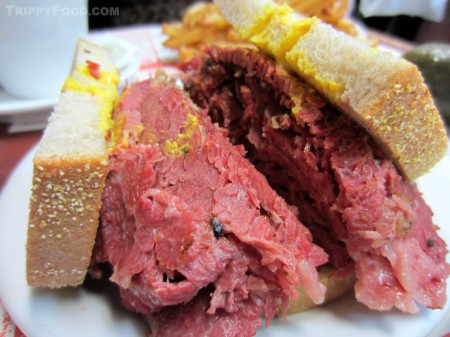 The moist and meaty smoked meat sandwich at Schwartz’s

Canadian popular culture has been fraught with conundrums throughout the decades – friendly debates that quickly escalate from checking to high-sticking such as who was a better player, Jean Béliveau or Wayne Gretzky; which band deserved the title, Rush or Mahogany Rush; and, who in Montréal makes the best smoked meat sandwich.  One sure way to start a way to melee bigger than a knock-down, drag-out outside Peel Pub is to ask someone where to find the best Montréal smoked meat (unless you’re on 7th Avenue in Manhattan) – if you’re in the capital of pastrami’s arch-rival, you need only refer to it as smoked meat (or, for more points, viande fumée). Smoked meat typically starts by curing (brining) a whole beef brisket with special spices, unique blends that most purveyors will take to their graves with them. The saline soak can take anywhere from several days to a week, after which time it may be soaked with a second application of spices. The cut gets its designation from the smoking process which changes the outside coloration of the meat to somewhere in the range between dark brown and black (although according to Montréal chef David McMillan, a great deal of it isn’t even smoked any more); it is usually steamed to finish cooking and to keep the meat hot for slicing. There are several preparations (including on poutine), but the most sought-after and competitive production method is the smoked meat sandwich. 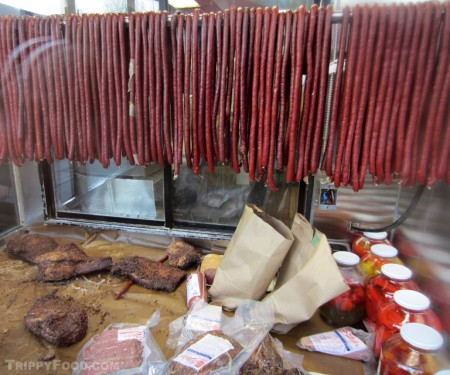 How much is that smoked meat in the window?

A traditional smoked meat sandwich is stacked with hand-cut meat that crumbles at the cut end into little bits on the plate. The substrate of choice is rye bread, with the variety often referred to as Montréal rye typically being bereft of caraway seeds. While some delis will ask if you want mustard, it is an assumed condiment and usually arrives at the table slathered on the top piece of bread. Bone up on your smoked meat jargon so when your waiter asks how you want your meat you can be specific – you’ll generally catch the hang of this as you see sandwiches arriving at the nearby tables with a wide variety of fat content and inside color. Since the whole brisket is used, there are different sections that have their own endearing qualities – the plate (also called the flat, or first cut, typically the section used to make pastrami) the point and deckle (or second cut). If you’re looking for a healthy choice, you shouldn’t be here in the first place, but asking for the ends will provide you with a sandwich where the lean, darker meat is more thoroughly cooked, as well as derisive looks from those around you. The standard method (and cut usually recommended by your wait staff when you leave the recommendation for your selection in their capable hands) is medium, with a nice balance of fat and meat and generally considered to have the best taste. On the far end of the spectrum you can ask for the fat cut, which will sport glistening globs of beef fat throughout, a rich and powerful mouthful if that’s the way you swing. 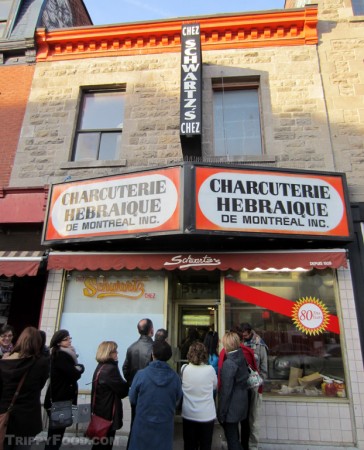 As with delis in the United States, the pickle is your friend, with the nuked cukes generally trending towards sour; French fries are the side dish of choice but in the established and obviously non-Kosher joints you may want to consider going all-Québec and junk and ordering poutine on the side. There’s relatively little difference in the presentation, so the hardest choice is which deli to hit. In my younger days, I frequented the spot that is said to have brought the dish to Montréal in the first place, Ben’s De Luxe Delicatessen & Restaurant; sadly, the house that Ben Kravitz built in the first decade of the last century folded after a nearly 100-year run. Asking a Montréaler where the best place to get your smoked meat on will get you a variety of answers based on their personal favorite, although most will point you towards last man standing, Schwartz’s Montreal Hebrew Delicatessen. Schwartz’s still stands at the original location established by founder and Romanian immigrant Reuben Schwartz in 1928; although it looks like it has been modernized, it appears the improvements may have been installed in the 1960s. You can’t miss the narrow, cramped deli – the line out front is a dead giveaway. Like most of the other purveyors of smoked meat, Schwartz’s wears their heart on their sleeve (or rather displays their meat in the front window, an act one would expect on St. Catherine Street). It is assumed that you’ll want to window shop before queuing up for your smoked meat fix. Main Deli Steak House (directly across the street) never seems to have a line, and although you’ll undoubtedly get a quality sandwich there without having to sit elbow-to-elbow at a community table after an hour wait, Schwartz’s is the smoked meat destination. Locals will talk to you in line and tell you that there’s better to be had in Montréal, but if your time in the city is limited, you’re in the right place. 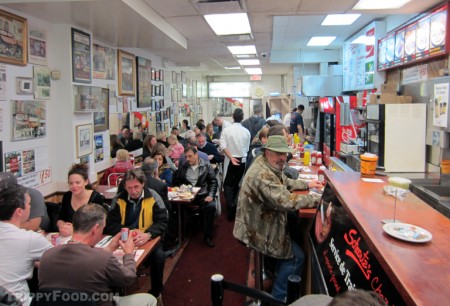 The menu is rather limited; you shouldn’t expect the kind of dishes you’d find at the Carnegie, 2nd Avenue Deli or Katz’s, but then that’s not why you’re here, is it? The atmosphere is similar to Washington D.C.’s boisterous, crowded and florescent-lit Ben’s Chili Bowl, and like Ben’s, you stood out in -1° cold for an hour, packed in like a pickled herring for the privilege of polishing off what can arguably described as Montréal’s signature dish. The sandwich is diminutive in comparison to New York skyscraper sandwiches, but the piquant and savory stack is satisfying in every way. If you asked for a medium, you can look forward to slightly briny, thick irregular slabs of meat that break apart with each bite; gone is the sometimes offensive odor of anise (incidentally if you’re that way inclined) in the bread, and present is the spicy bouquet of the moist and flavorful meat, cut with the liberal application of the mustard. I make no recommendations for any of the other sandwiches on the menu – save that for your next trip to New York. Schwartz’s is open relatively late (until around midnight), but if the smoked meat sandwich didn’t fill that void in the deep, dark recesses of your digestive tract, you can always head on over to Gibeau Orange Julep for something tasty to wash it down.

Smoked meat sandwiches are a source of pride for Montréal and the restaurants and delis that make them, and trying to choose which to enjoy can be as competitive as the contest for Lord Stanley’s cup. Whether you enjoy Schwartz’s or one of the nearly 100 delis in Montréal competing for your business, make it a point to savor a smoked meat sandwich on your next visit to Montréal… then you can get the puck out of here.