Orange You Glad You Stopped 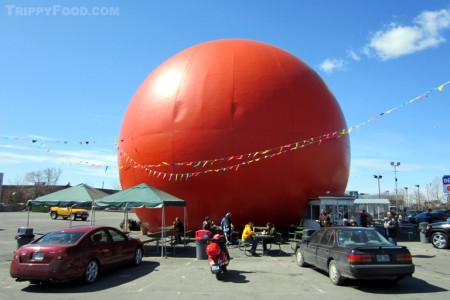 Florida and California are synonymous with citrus fruit, and in particular, oranges; it would be a fair (yet incorrect) assumption that the sweet and juicy orb originated there (it is thought to originally have been first cultivated several thousand years ago in China). Both states have an Orange County and countless place names that pay tribute to the fruit, while there are orange trees in virtually every back yard. Each has had their fair share of historic orange-shaped buildings and shacks that Anita Bryant would be proud of, most of which vended orange juice in their former lives; few remain. Once such stand located conveniently along Route 66 in Fontana, California is labeled simply “Bono’s Historic Orange”.  It was originally built in 1936 to quench the thirst of those who decided to motor west on the route that’s the best through the desert towards the oasis of Los Angeles but has stood freshly painted yet unoccupied for years. 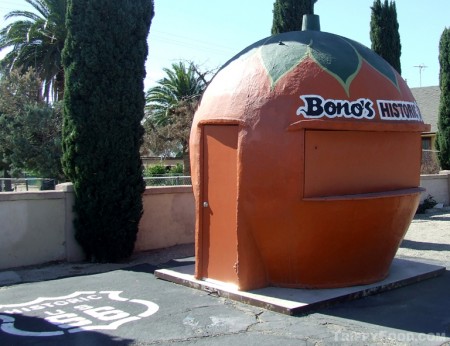 Although the defunct juice stand in San Bernardino County has come to be known as “Bono’s Giant Orange”, one juice stand in the Great White North of Montréal makes it look like a kumquat. Gibeau Orange Julep was originally built on Boulevard Décarie in the 1940s at a respectable two-stories high as a restaurant from which Hermas Gibeau could sell his unique Orange Julep drink to thirsty Montréalers and travelers alike. Gibeau also maintained other stands and restaurants in the Montréal area, with some also shaped (and colored) like oranges; however, the stand on the corner of Décarie and rue Paré is the only one remaining. When the boulevard was expanded in 1966, so was the globe – by the time it was completed, it had attained a forty-foot diameter and was (and is) visible from miles away. 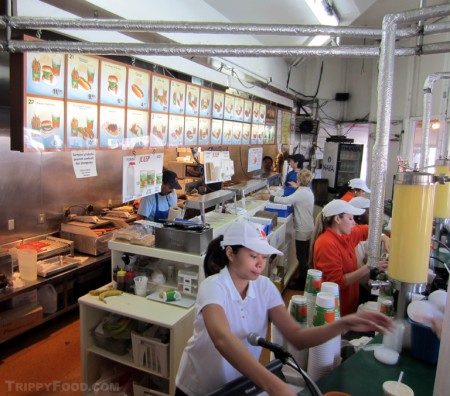 The menu isn't important - the beverage is

The restaurant portion is the only part of the structure with windows, with the entrance wrapping partway around the outside as if the orange had simply rolled on top of it. The gunite and plastic panels covering the colossal fruit are bereft of dimples and there’s no obligatory stem and orange leaf on the top; with no signage on the outside of the structure it could easily be confused for a ball or a small planet. Inside, the counter wraps about halfway around with a ceiling and walls which hide most of the interior, allowing conjecture to take over – what’s back there? A grove of orange trees? Orange-squeezing Oompa-Loompas? A series of tubes, chutes and raceways where oranges have their citrus lifeblood extracted in some Rube Goldbergesque mechanical juicing monstrosity? To further add to the mystery, foil-wrapped tubes extend from the back and deposit the frothy, orange beverage into tall, cylindrical glass holding tanks reminiscent of an old gas pump. 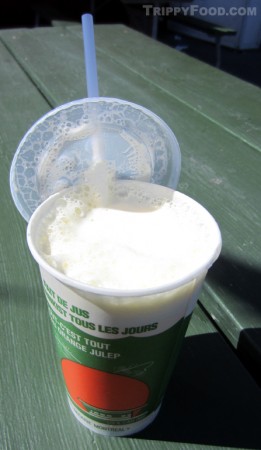 The menu runs the length of the back wall in 2×2 backlight squares, featuring illustrations of a cornucopia of roadside dining menu items – hamburgers, hotdogs (listed as Nathan’s), poutine, sausages, Michigans, grilled cheese, all which I’m sure are tasty and nutritious. If that’s your cup of meat, by all means, indulge and enjoy; however, one should not descend into the bowels of a giant citrus fruit only to order something more suited for a dockside visit to Coney Island. The term “orange julep” conjures images of drinking a nearly clear beverage while watching a horse race in a ridiculous hat or getting a case of brain freeze gulping that pulpy treat Julius Freed decants into paper cups at your friendly neighborhood food court, and although neither is accurate, the latter is probably closer. The actual ingredients appear to be more of a well-kept secret than the recipe for Coca-Cola; the beverage is sold commercially in plastic bottles, and although the website doesn’t really tell you where to get it (or what’s in it), the picture appears to have a more even color and consistency than the real deal. The nutritional information lists 24 grams of carbs and 22 grams of sugar in a power-packed 96-calorie 250 ml (about half a pint) serving, but again, you didn’t bore into the orange for a lecture from Jamie Oliver.

The drink itself (at the stand at least) is a cold, satisfying vessel of pulpy delight, whipped into a golden froth that almost defies a straw. The Orange Julep doesn’t have the firm body of a frappe or milkshake, although there is a definite suggestion of dairy – it’s probably more akin to Southern California’s Orange Bang than Orange Julius; it has a smooth, cooling finish echoing a Creamsicle blended with orange juice. In the sweltering heat of the Montréal summer, it’s comforting to know that refreshment is just an orange’s roll away, 24 hours a day. There’s no indoor seating, but there are a plethora of community picnic tables at which to enjoy your golden liquid banquet in a parking lot that looks like it could double as a used car lot (a quality amplified during the occasional classic car show beneath the shade of the massive orange).

I wouldn’t encourage a the cost of a plane ticket to Montréal simply to pay homage to the citrus giant and sample it’s orange bounty, but it bears visiting while you’re on a quest for the perfect poutine, superlative smoked meat or best bagels. Squeezing in a side-trip for an Orange Julep at Gibeau’s giant orange is an act that requires little concentration.

2 Responses to Orange You Glad You Stopped