Land Of The Free, Home Of The Brave 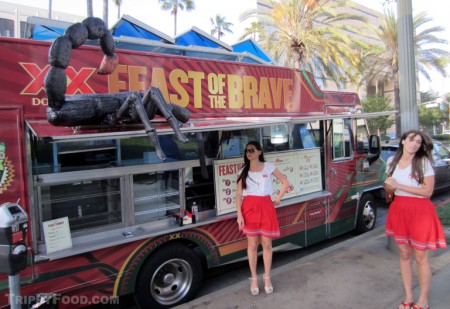 L. A.'s Don Chow truck disguised as the Feast of the Brave truck

Dos Equis recently issued a challenge across six cities across the U. S. to see which metropolis would step up to the plate and prove that they were the bravest food adventurers in a campaign bearing the title “Feast of the Brave”.  This mobile version of Fear Factor found established food trucks in Austin, Houston and Dallas, Texas; Chicago, Illinois, Miami, Florida; and Los Angeles, California sheathed in temporary Dos Equis skins and handing out free tacos for points – the more tacos consumed, the higher the stakes. With no prize stated, the payoff was obviously a tanker filled with Maalox and bragging rights that you ate The Most Interesting Taco in The World. Each city featured four tacos negotiated with the food truck owners, with the fourth taco welded shut in the Frialator in order to conceal the contents, undoubtedly the biggest secret to draw conjecture since The Mystery of Al Capone’s Vaults. The progressive challenge upped the ante for each taco, the first providing the truck (and the city) 10 points, with the stakes being raised 10 points for each subsequent taco (the assumption being that each provides a higher level of peristaltic difficulty). The house gave The Mystery Taco a generous 100 points for each consumed, and with no disqualification for blowing your groceries like at The Big Texan a city the size of Los Angeles seemed destined for victory – after all, it IS the de facto home of the taco with natives downing thousands of tortillas filled with everything from kimchi to grasshoppers on a daily basis. 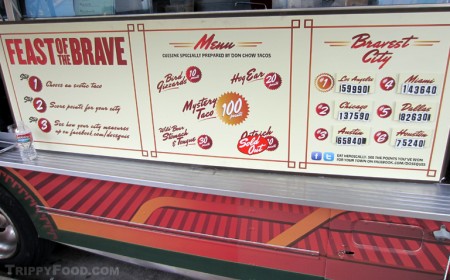 The Los Angeles Feast of the Brave menu

Dos Equis’ Facebook page for the challenge provided the menu in advance with links to each featuring recipes allowing you to create these ghoulish gastronomic creations in the privacy of your own dungeon (should you be able to source the ingredients from your local Publix or H.E.B.). Had the Concorde still been in operation, I would have pulled a Phil Collins and sampled the offerings in each city; my only option appeared to be to take the Los Angeles truck head on with wingman and fellow bizarrenivore Eddie Lin in tow. In L.A., Dos Equis negotiated with the Asian/Mexican fusion Don Chow truck to sling the varmints. Chefs and owners Dominic Lau and Lawrence Lie were on hand, decked out in their “Feast of the Brave” in their unrecognizable mobile restaurant; they had negotiated on the low end to do a “bird gizzard” taco worth 10 points, progressing to a hog ear taco and finally a wild boar stomach and tongue taco for 30 points. Although the placard on the truck had a “Sold Out” sticker over the presumably 40-point ostrich taco, the mini-skirted Dos Equis representatives admitted that they weren’t able to procure the avian behemoth (I would have cheerfully directed them up to Ostrich Land in Buellton armed with flashlights and a big net).

None of the Los Angeles options seemed daunting, especially to someone who doesn’t bat an eye while placing wriggling octopus tentacles into his gaping, eager maw; the only thing I considered challenging was the prospect of trying to guess the contents of the Mystery Taco. In a city where one can easily procure blowfish soup or foie gras doughnuts, L. A. was sure to be the odds-on favorite, especially when considering the fare in the other competing cities:

The menu in general seemed like a bedtime story to help Andrew Zimmern sleep; the only thing that could make the challenge daunting would have been substandard preparation, or having the taco meat filling a Dorito shell. 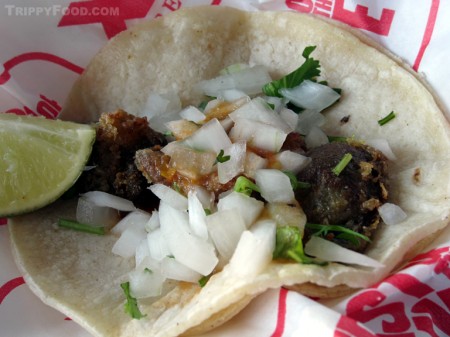 The 10-pointer billed as “bird gizzards” turned out to donated by the omnipresent chicken (pigeon or emu might have been a nice departure); I was prepared for the experience of having to masticate organs imitating the texture of pencil erasers, but to my pleasant surprise, the gizzards were relatively tender (they still had some teeth to them, a quality that is most likely unable to be cooked out). These were treated with curry powder and presumably flash fried to give the nuggets a crunch and spicy coating, and they were absolutely delicious.

Ascending to the 20-point level, I sampled the hog ear taco. I wasn’t sure if these were going to be Asian-style (cold and rolled in thin strips), Colombian-style (sautéed into a leathery membrane sandwiched between two gelatinous layers of skin), or deep fried into a crackly chicharrón. The presentation was described by Chef Lau as “Listen-Up: Pig Ear 2-Way”, which was braised on the bottom and fried on the top. After cooking whole, the ears were then sliced into thin strips – the contrast in texture was amazing; one side was soft and moist with the opposite side having a crispiness that lead someone to dub the dish “ear bacon”. The crispiness added a wonderful complexity to the taco, and the fact that it was crispy made the strips crumble easily between my teeth, saving me the typical labor of having to chew the life out of it. 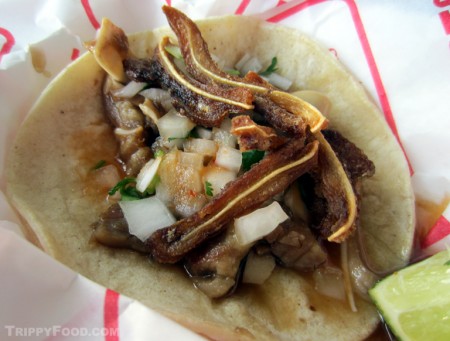 At the supposedly fearsome 30-point level, the wild boar stomach and tongue ended up being my personal favorite. Chopped bits of the tender and fatty tongue played well with the slightly chewy, tripe-like hog maw, and the blend soaked up a considerable amount of savory broth that emanated forth with each bite while not disintegrating the taco. I had previously had both ingredients in tacos elsewhere, but none compared to the amplification of flavor present here. I was somewhat disappointed to hear from Chef Lau that the taco was only available during the “Feast of the Brave” promotion as the prep time made it prohibitive to an option on the truck. 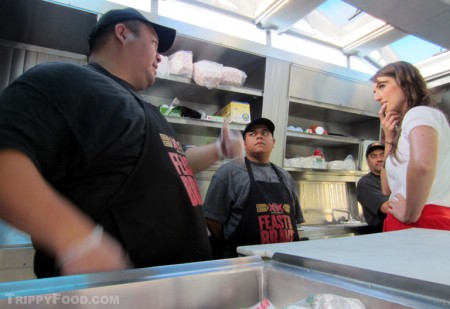 The final entry (the Mystery Taco) was deep-fried so as to conceal its contents, and on the plate it looked like a thin, flat empanada. The Dos Equis reps and Don Chow chefs asked if we could guess the contents, offering only that they were “vegetarian”; I was anticipating a burst of funk from stinky tofu or durian but encountered a pasty semi-fluid with the consistency of oatmeal that to me was reminiscent of reconstituted powdered eggs. There were several small bits of a slightly rubbery, translucent substance that almost tasted like jellyfish (although that theory was quickly shut down by the staff). Eddie Lin took a bite and remarked that he was getting the taste of tofu, but not much else. Under threat of harm to our families for divulging the secret ingredient prior to the end of the contest, Chef Lau confirmed that the Mystery Taco contained a blend of 1,000 year-old egg and tofu (which accounted for the rubbery bit my tortilla offered up).

Nothing we had sampled came close to requiring much bravery from either me or Eddie; in fact, since the tacos were free, we decided to represent for Los Angeles and had two or three more. It seemed that some of the competing cities had more hardcore Mystery Tacos –  Chicago’s entry featured chapulines, which must have been instantly both identifiable and shocking at the same time; Dallas’ Mystery Taco featured iguana, which forgivably could have been dismissed as chicken. Houston had the entry that epitomized the spirit of bizarre cuisine – scorpion (a taco that I can only surmise must have been absolutely delicious, if fried). I have to wonder how the organizers could have possibly thought that Austin’s jalapeno taco and Miami’s ox tail could even be considered a mystery after the first bite – I have no doubts that the Cubanos in Miami filled up on repeat servings of the dish.

A savory combination of wild boar tongue and stomach

When all was said and done and the points were tallied, Miami was the winner by a landslide, garnering an astounding 258,270 points. And on the Left Coast alma mater Los Angeles squeaked in at 80,190 points, finishing dead last, a humiliating showing for the taco capital of the U. S.. Although on a personal level I found the challenge not-so-challenging, I enjoyed the tacos as prepared by Don Chow and feel that if they were made widely available in that format, these cuts that are considered by some as unapproachable might find appeal and recognition with the general public. In hindsight, I have to wonder which taco Jonathan Goldsmith would have found the most interesting.