I Left My Meat In San Francisco 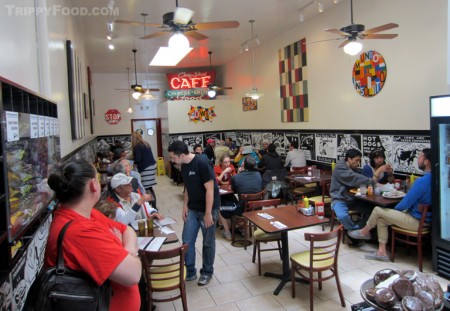 What kind of meshugeneh has the chutzpah to open a deli in San Francisco’s upscale Nob Hill neighborhood and brazenly sandwich “East Coast” in the title? Enter Robby Morgenstein, a Jewish kid from Baltimore with a deli family pedigree and schmaltz running through his veins. How we get from Morgenstein to Miller is anybody’s guess, but the fare is as representative of your friendly neighborhood delicatessen as you could want in Shakytown. Once inside, it takes a moment or two to acclimate to the surroundings – there’s no black and white tile or tin ceilings here, and the pop art pieces on the wall make the open room look more like a gallery than a restaurant; a rustic-looking, out-of-place neon sign at the back advertises a “Coney Island Cafe” with “Chinese-American Food” leading one to wonder, with all the classic delis back east folding their tents, if they couldn’t have found something a little more Kosher. 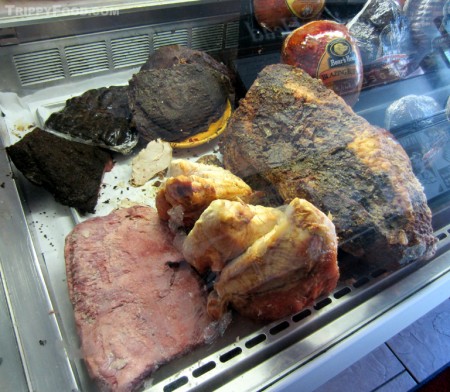 A banner of monochromatic art deco posters border the room at table level – the often-repeating panels push generic, occasionally tongue-in-cheek messages such as, “Good Foods Served Right”, “The Finest Meats in Town”, “Your Favorite Cheese”, and the descriptive “Golden Waffles Wallowing in Butter and Maple Syrup”. The vibe gives the feel of what an anthropological deli museum exhibit might look like two hundred years in the future. Although the posters aren’t very helpful in deciding what to nosh on, their expansive menu hangs behind the counter on a movie theater screen-sized board to help you choose while you wait to be seated. Nearly everything you would expect to be on an East Coast deli menu is, with treats like tongue Polonaise, kishka and even and sour green tomatoes (which, with my luck, they had conveniently run out of). While the starters included knishes, I ended up muttering “East Coast, Shmeast Coast” to myself after seeing only the vegetarian potato, spinach or Coney Island potato (which I pray differs greatly from Coney Island whitefish) on the menu, obviously catering to the twigs-and-bunny crowd from Marin County. 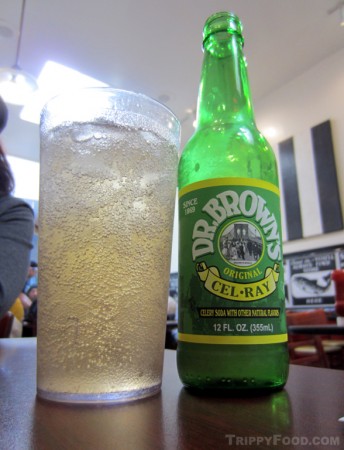 My original intention was to break the yard stick pastrami sandwich down to its simplest form to see what kind of East Coast game Chef Morgenstein is bringing to the Bay Area, but my eyes widened to the size of teacup saucers when I looked at the proliferation of celebrity given name and surname christened sandwiches and saw The Buddha, a sandwich obviously made specifically for me. This omnivore’s dream features a heap of layered chopped chicken liver, pastrami, red onion, tomato, coleslaw and Russian dressing and it was a foregone conclusion that Buddha was getting in my belly. I opted for the Russian dressing on the side, as I correctly anticipated the behemoth would be a glorious moist mess. My choice of cold beverage with which to wash down this fine mélange was the venerated Cel-Ray (the Dr. Brown’s variety with the Brooklyn Bridge, not the Golden Gate, on the label) as I had never had the celery-flavored drink before. If you haven’t tried it, the first sip has a sweet, almost ginger ale character, but finishes with a kick of celery that remains on the tongue after the swallow – the rest of the bottle gradually amps up the celery flavor, so caution is in order if the stalky vegetable isn’t your cup of tea. 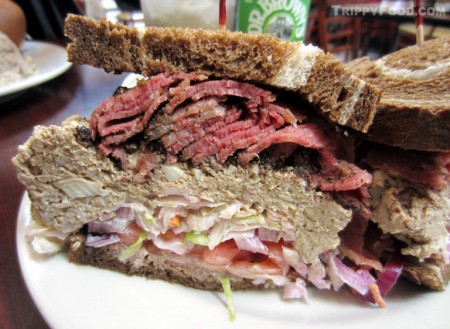 A cross-section of the ample Buddha

When my sandwich arrived neatly halved and guarding a perfectly formed scoop of horseradish-laced potato salad, I appreciated the image that the waiter-recommended marbled rye presented, framing the sandwich in spongy, color-coordinated heaven. Although I enjoy Jewish rye, the anise flavor of the caraway seeds would have been too over-the-top with this “everything but the kitchen sink” dish. Since each component was neatly layered in flora and fauna strata I decided to sample a loose piece of the pastrami to see if it held a candle to geographical East Coast delis; the meat was tender and moist with a slight amount of teeth to it – it was neither too spicy nor too salty. Miller’s imports their pastrami from the city that is synonymous with pastrami – Detroit. While that claim might prompt a bat attack from the Bronx Bombers, the waiter explained that Morgenstein tried a variety of pastrami from various sources in New York but found that the product lacked consistency (it was often too fatty, while other times too lean) until finally settling on Motor City’s Sy Ginsburg Gold Label. 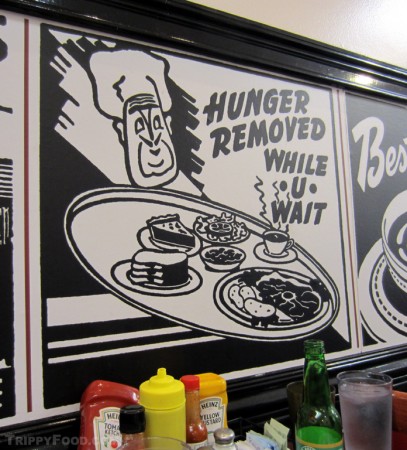 t was more like hunger removed while I ate

By all rights, the contents of the sandwich promised not to play well with each other, but from the first bite to licking the last dregs of chicken liver from the plate, the dish was an orgasmic cacophony of flavor and texture. The red onion was sweet without being overpowering; the coleslaw and tomato offered a cool and crunchy garden flavor. Both the chicken liver and the pastrami could very well have stood on their own two feet, but the rich, creamy and earthy mush was muted by the spice and savory flavor of the meat, and each stood their ground without stepping on each other’s toes.

Miller’s has enjoyed a healthy success since opening their doors in 2004 and the installation of a pizza oven in 2010 added to the deli’s roster as well as its popularity. The deli business has been so good to Morgenstein that he was able to expand across the bay to San Rafael early in 2012. I’m not sure I’d trade a ticket to JFK for a trip to Miller’s, but it is worth taking a Brodie off the Golden Gate for authentic East Coast deli fare.