Then Came The Last Days Of June 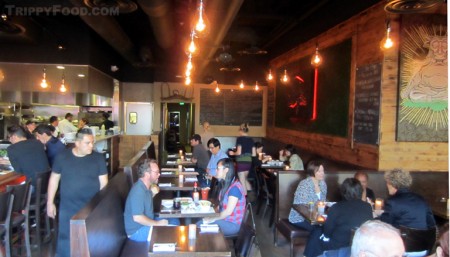 As the thunderous sound from the webbed feet of the Waterfowl of the Apocalypse rises above the horizon to herald California’s ban on foie gras (Senate Bill 1520 is slated to become law on July 1, 2012), not everyone is trampling the bodies of the innocents to man the Titanic’s life rafts. Perfecto Rocher, Executive Chef and partner at Los Angeles’ Lazy Ox Canteen has elevated apathy to an art form with the announcement of the gastropub’s pending “Forget Foie” dinner menu, which will be offered at Lazy Ox on the last two days prior to the ban. Chef Rocher is quick to point out that there is no substitute for foie gras (the rich, decadent treat made from enlarging the liver of a waterfowl through force-feeding), and that he personally loves the organ paste, but he won’t be losing sleep over the ban.  Rocher cut his teeth learning the art of paella, but as a child he also picked up a thing or two from his grandmother (friends packed into his kitchen like fans of La Roja for a taste of his home-made Nutella). Originally the concept of Lazy Ox was to feature the cuisine the Catalan region of Spain that Chef Rocher calls home, but his flair for experimentation garnered from a stint under Ferran Adria at world-famous El Bulli results in a menu that changes daily. 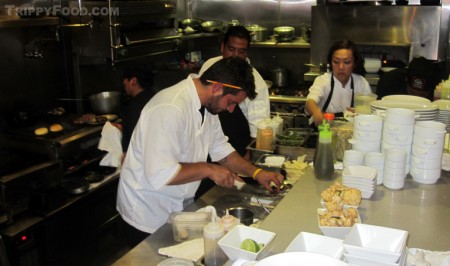 Although the chalkboard typically offers dishes featuring a variety of offal ingredients, the pending “Forget Foie” menu is a veritable cavalcade of liver, represented by the blood-filtering organ of cows, pigs, rabbits and even monkfish, with not a duck or goose liver to be found. On my visit to preview the menu, Chef Rocher took the opportunity to show off other creations that are well deserved sources of pride; we started out with a Carpaccio of Ibérico de Bellota pork lomo (loin) that was so thin it was translucent. The pork is sourced from Ibérico Fresco, a co-operative in Spain where the hogs are allowed to roam free and nosh on acorns; this rare breed is difficult to come by in the United States, and Chef Rocher is one of the few (along with The French Laundry’s Thomas Keller) who import it. The flesh literally melts – no chewing is required; it has a nutty flavor and a buttery texture with a slightly salty finish. 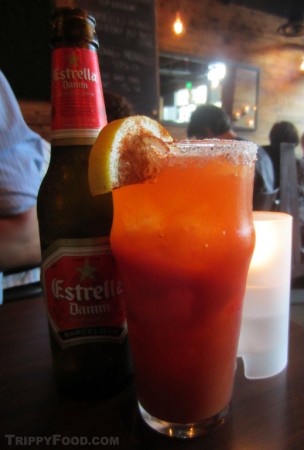 A remarkably refreshing Michelada made with Spanish Estrella Damm beer

When visiting the House of Rocher, one must drink as the Valencians do; Lazy Ox makes their own sangria, a rich, purple, mint-accented beverage that despite the large cubes of fruit is not overly sweet. They also feature a salt-rimmed, spicy Michelada made with Estrella Damm (a high quality beer from Spain) – one sip and you will never go back to the freakish brew from Budweiser.

Another liverless dish we sampled was a stone fruit salad capped with a dollop of whipped goat cheese that melted into a crème and infused with a nectarine emulsion. The fresh, ripe plums offered a pleasant tartness to the dish, offset by sweet and juicy chunks of peach. With the combination of croutons added for crunch, a frisky laurel of parley, and a light balsamic dressing, the fruit was a lively and refreshing accoutrement. 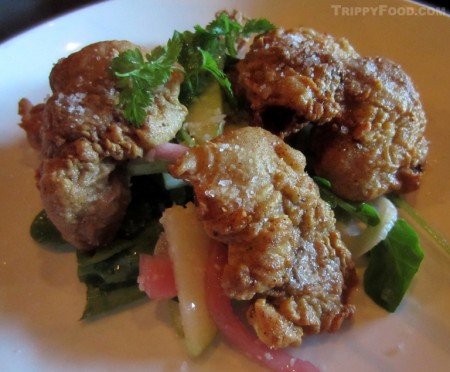 Rabbit livers, crispy on the outside, creamy on the inside

The first order of business in the liver department was an exemplary entry that I would do great injustice to simply to refer to it as Crispy Rabbit Liver. The chicken-sized organs had been marinated in buttermilk and paprika for 24 hours and then flash-fried wearing a tempura-style coat. These were then laid to rest over a bed of dandelion, hearts of palm, pickled red onion that hid a shallow pool of arugula avocado dressing. The livers were light, sweet and mellow, with the hot contents almost liquefied to the point where they would have served well as foie gras methadone. 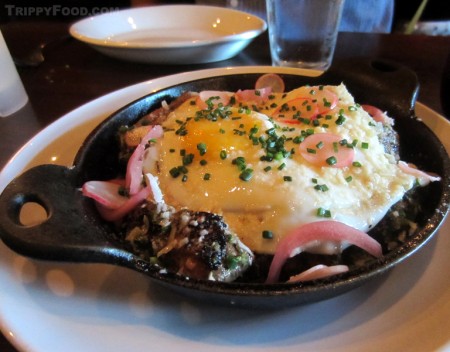 A powerful and sturdy beef liver a la plancha

The namesake ox was represented in a sturdy barnyard dish of seared “beef liver a la plancha”, rare strips of meat that looked to be trying to escape from under a dominating fried egg. Underneath the hen fruit, soft chunks of yam mingled with the liver, adding some sweetness and cutting its extremely strong taste. This is not a dish for the meek; although the conglomeration of yams, radish, onion, and egg mixed with a tarragon emulsion added complexity to the dish’s flavor, the liver muscled its way to the foreground of the palate. If you are on the fence when it comes to beef liver, watch out – this bull will gore you in less than a heartbeat. 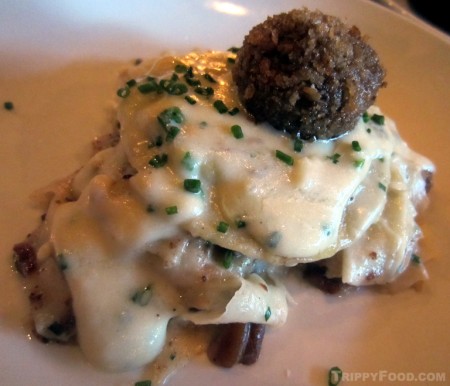 A pasta dish not appearing on the “Forget Foie” menu was an afterthought of Chef Rocher and a way to incorporate his freshly-made ravioli and what appeared to be a cross between tagliatelle and pappardelle noodles. This extraordinary concoction began at the bottom with the paper-thin ribbon noodles resting above a creamy sauce impregnated with blood sausage and chives; stacked above the noodles were the saucer-shaped ravioli, with the stack doused with more of the crème sauce. On top of old smoky was perched a small orb of fried pork liver, dark and moist with the color of stuffed mushroom; the core was pinkish in color and a generous forkful was intoxicating, where each bite begged for a follow-up. 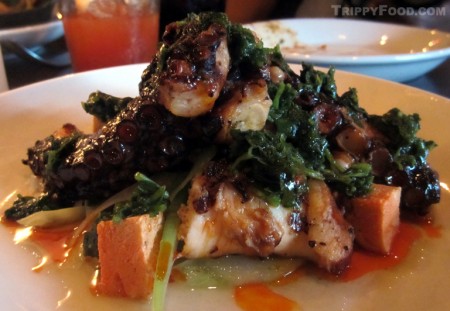 What followed was nothing short of impressive – a mound of thick segments of octopus tentacles that had been braised with greens in a beer-filled pressure cooker was stacked over cubes of monkfish liver that took on an odd orange hue from the tomato confit. The dish was an odd collection of surprising textures – the carbonation of the beer used to slow-cook the octopus resulted in it being able to be cut with a fork; it was the tenderest presentation of the mollusk I’ve ever sunk my teeth into. The monkfish liver mimicked the consistency of tofu (with which it was initially confused). The dish was treated with muscatel vinaigrette and the oily, red, tomato-tinged fluid coated the octopus, imparting an almost barbecue-like flavor. The taste that seemed to linger the longest was that of the vinaigrette; sadly, the cooked-down tomato slice at the bottom remained as an afterthought, not making its way into any of the mouthfuls of the other ingredients. 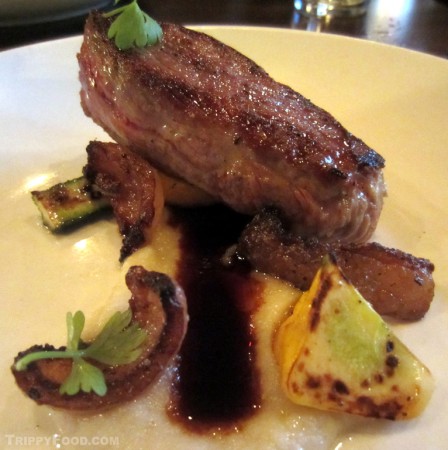 This Ibérico de Bellota shoulder loin could pass for beef

The pièce de résistance ironically contained no liver at all; a generous steak of richly-marbled Ibérico de Bellota presa (shoulder loin) accompanied by a potato-like sunchoke puree presented itself as a pig in cow’s clothing. The only tell that the thick slab of meat was porcine in nature was its color; for all intents and purposes, it could easily have passed for beef. The sparsely populated plate featured a couple of grilled yellow squash wedges and what originally looked like small curls of sautéed onion; one taste of the whitish pieces gave them away as grilled pork fat. 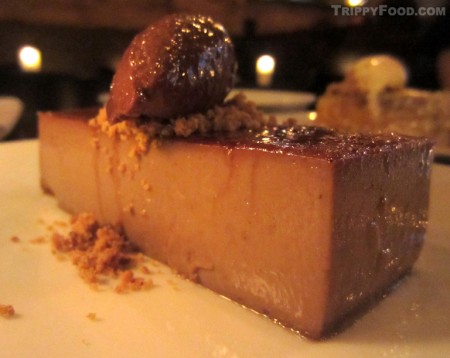 Dessert included a couple of uniform rectangles in a display of color contrast; a mousse-like flan made with Chef Rocher’s own Nutella was topped with almond crumbs and visually made the perfect dessert for the “Forget Foie” tasting as it almost looked like a slab of raw liver. A rich and sweet torrija a la plancha accompanied by a diminutive scoop of caramel ice cream employed toasted brioche; the result was a white, sweet, grainy cake that resembled thick rice pudding in texture and would be the perfect foil for one of Lazy Ox Canteen’s cups Intelligencia coffee. I had begun to regret finishing with the sweets as I wanted to savor the taste of the meats longer when Chef Rocher dashed across the room to have me sample a chunk of his home-made longanisa stuffed with pork and fava bean paste. The savory sausage brought me back to that special place where meat reigns as king, a fitting tidbit to cap the evening’s fare.

The “Forget Foie” menu also features corn soup with coconut cream and crispy pork livers, a Huevo Andoni and chicken liver dish and the award-wining Lazy Ox Burger accompanied by lamb liver, and while it certainly won’t trick your palate into thinking you’re on the Foie Gras Express train out of California, I guarantee you will forget about the… um… what was that dish again?

4 Responses to Then Came The Last Days Of June