Come On Piggy, Give Me A Ride 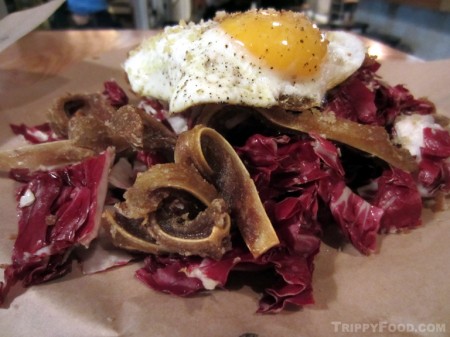 It takes thick skin to walk into either of Lardo’s Portland locations without somehow feeling that the name is a taunt directed at you rather than having been derived from the charcuterie offering of cured pork fat. Lardo is a porcine tribute, nay, shrine to the humble and versatile pig, whose varietal cuts are prominently featured throughout the menu. Each site has an obligatory simplified line diagram showing Miss Piggy’s five prime cuts in mural form, as well as a bulb-array sign reading, “PIG OUT” that looks as if it came straight off a Broadway marquee. Lardo is the labor of love of Chef Rick Gencarelli who literally covered the country gastronomically from shore to shore before settling in Portland in 2010 to open a piglet food cart in Portland’s Sunnyside pod. After word spread about his now-legendary pig-product sandwiches, Gencarelli opened a brick-and-mortar sty on Hawthorne (ironically directly across the street from the Cartopia food cart pod) in the summer of 2012, followed by a second more spacious location downtown on Washington Street in December. 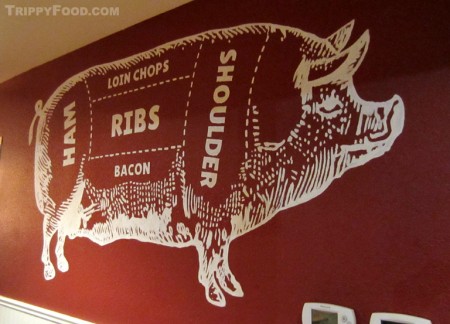 The rapacious references go far beyond the onslaught of piggy imagery – the menu is rife with dishes where Babe, Porky and Napoleon manage to sneak their way onto the plate; bacon lurks salaciously in Lardo’s popular cold fried chicken sandwich, while the Double Burger gets porked by a hefty slab of pork belly. Think the sides manage to slink away without having to squeal like a pig? Nosiree, Bob! On the subtle side are the Lardo Fries crisped up in pork fat – on the other end of the scale are the Dirty Fries, taken to the next level with bits of pork scrap, chopped pepperoncini, fried herbs and a liberal application of parmesan cheese (and blissfully not labeled as Portland poutine). The copious serving of Dirty Fries are hardly a side order; likewise with the Crispy Pig’s Ear Salad, featuring pappardelle-sized strips of crunchy fried pork ear infiltrating a bed of radicchio, topped with the ubiquitous fried egg and a light drizzle of bacon vinaigrette, proving that you can’t make a silk purse out of a sow’s ear, but you can make a hell of a salad. 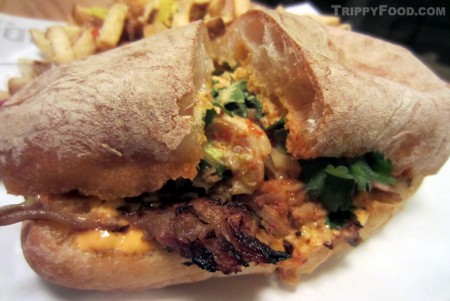 The Korean pork sandwich at Lardo West Side

The sandwiches are pork conveyances of delight – while not letter-perfect, the Cubano boasts authentic crusty Cuban bread stuffed with thick layers of Capocollo and oozing Provolone, oddly halved, stacked and skewered with a lanced dill pickle chip. Of exceptional note is the Korean Pork Shoulder sandwich, an artisan roll gorged with pork grilled to a light char resting on a thick smear of chili mayo and smothered in house-made kimchi and fresh cilantro – the flavors are astounding and intoxicating, rushing at you like a Russian boar in heat. To quell the damp Portland skies during the seasons when the sun is reclusive, the East Side location features a huge tent over a heated seating area (which also houses the Sugar Cube Sweets food cart, the perfect source for dessert and coffee after pigging out). 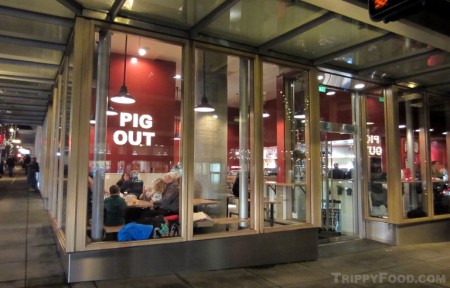 The newly-opened Lardo West Side

The danger associated with repeated visits to Lardo for the addictive fare is that there’s a strong possibility your loved ones will soon be remarking, “Hey boy – you look just like a hog”.

GALLERY: See images from Val’s visit to both Lardo locations in Portland, Oregon