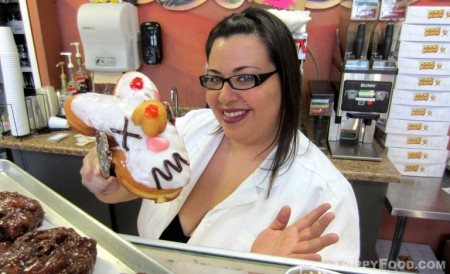 Nurse, get me a Rabbit Roadkill, stat!

It would be a forgivable mistake to dismiss Silicon Valley’s Psycho Donuts as a novelty store – the windows and glass doors on the otherwise normal-looking storefront in a tiny Campbell, California strip mall are plastered with vinyl decals depicting a white van full of grinning cracker-factory orderlies chasing a frightened doughnut (“Donut Guy”). During normal business hours, a smaller version of the crazed confection on the run advertises that Psycho Donuts is “OPEN FOR INSANITY”; stepping inside the “asylum for wayward doughnuts”, your eyes are immediately drawn to a padded booth in the middle of a wall of original psycho art, while the basketball-sized eyes hanging in the window appear to be drawn to you. Before you can scan the glass case for the product of the dough-nuthouse’s cheerful insanity, one of the attendants hands you a small square of bubble wrap to occupy your time in lieu of weaving baskets or sculpting clay bunnies – if you still can’t make up your mind, a handy vertical doughnut roulette wheel stands at the ready to help you make that crucial decision regarding your loved ones. 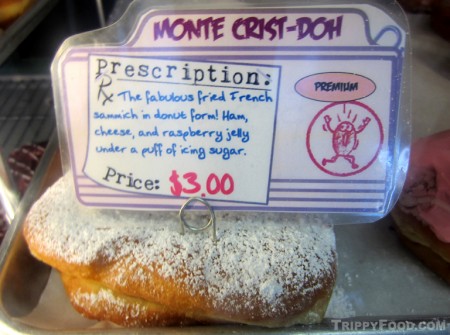 While this all this bedlam might seem like diversionary doughnut disquietude employed to distract from baked goods noteworthy in appearance and name only, Psycho Donuts delivers the goods. With names like “Glazed and Confused”, “Cereal Killer”, “Headbanger”, and “Comfortably Numb” (a sad-faced straight-jacketed confection) once might dismiss the doughnuts as being of the same quality as novelty items available by mail-order from the Johnson-Smith catalog, but self-appointed Doctor of Donut Derangement Chef Ron Levi puts careful thought and culinary skill into each menu item. Although Levi is of imposing stature and could easily take down a raging lunatic, once he opens up about his creations you realize how much joy creating each doughnut brings him. Originally born in Israel, Levi’s family emigrated to Canada where he learned the trade, eventually bringing his skills to California. Opened as collaboration between Jordan Zweigororn and Web Granger in 2009, Psycho Donuts is a pastry palate colored by Levi’s limitless imagination. While lesser doughnutiers would cater to the expectation of providing holiday-themed doughnuts, Levi is uncomfortable with that kind of pressure; most of his more imaginative creations are the result of writing down the three or four ideas he gets stepping out of the shower. This past Easter saw Bunny Ballz (doughnut “holes” rolled in coconut), Rabbit Roadkill (a hand-size raised doughnut with the face of a lagomorph traffic fatality), and Peep Show (a raised doughnut with maple icing and a marshmallow Peep attempting to hatch tiny Cadbury eggs sitting on a nest of shaved coconut). 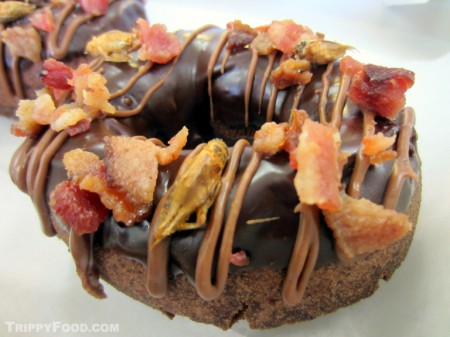 Yes, those are crickets and bacon atop the Chirp Derp

Levi’s talent has garnered recognition internationally – he recently competed on Episode 6 of Food Network Canada’s “Donut Showdown” featuring a doughnut that rose over the bar set by Swirls in Omaha, Nebraska with the breakfast of champions – the Malted Waffle Bacon Donut (Psycho Donut actually has several doughnuts employing maple and bacon in the recipe). If a Monte Cristo is more your speed, Psycho Donut has a plump disc stuffed with ham and cheese and dusted with powdered sugar. One customer came back in the store to report a confectionary error in the parking lot – as his wife bit into her Monte Cristo in the car, she was greeted with a spurt of jam, at which point Levi explained that it’s supposed to be in there. He enjoys concocting “boozy doughnuts” – for this past St. Patrick’s Day his doughnut with Irish whiskey glaze was a big hit both in front of and behind the counter (according to Levi, there was much spoon-licking going down in the busy kitchen). Initially the offerings appear similar to the bizarre sinkers found at Portland’s Voodoo Doughnut with shapes, toppings and decorations befitting of a doughnut shop with “Psycho” in their name, such as the Crazy Face, but the difference lurks below the surface – the flavors are overwhelmingly delicious. In the boozy category, the Strawberry Margarita is a regular menu item featuring tequila pastry cream, and strawberry icing with a spiral of lime, capped off with a freeze-dried strawberry and a pinch of Margarita salt; the colossal Sticky Monkey is a massive raised fritter rife with fresh bananas, cinnamon, rum, and caramel made with sea salt. 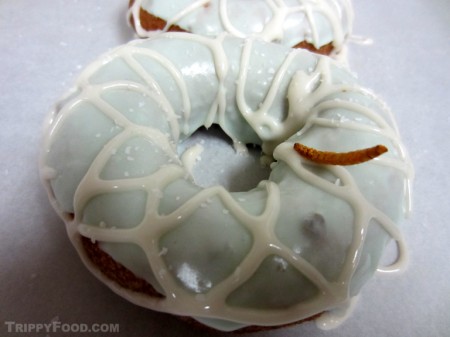 The Worm Hole, complete with mealworm

For National Doughnut Day in June of 2012, Levi went full-bore lunatic and devised a duo of dunkers that raised many an eyebrow of even the most seasoned doughnut aficionados – the insect-themed Chirp Derp and Worm Hole. The Chirp Derp is a chocolate cake doughnut blended with chipotle powder and vanilla; after cooking, it is glazed in dark chocolate icing with an artistic lacing of milk chocolate. Each doughnut gets an application of crumbled bacon and three strategically-placed bacon cheddar-flavored crickets. While the adventurous foodie might see themselves ordering a box of the Crickettes from Hot Lix and stopping for a dozen Krispy Kremes to attempt this insectavorian adventure at home, it will be lacking in Levi’s visionary skills as a master in the doughnut arts. The first thing that grabs you is the aroma – rich and sweet, like a hot mug of Mexican coffee. Be sure to engineer at least one Jiminy in the first bite; with the other prominent flavors of the doughnut cutting through, the crisp and smoky cricket is more for texture than taste.  The first sensation is the chocolaty sweetness, but then the bite finishes with the mellow chipotle burn – the best way to describe it is like an exotic Oaxacan pastry complete with chapulines accents. 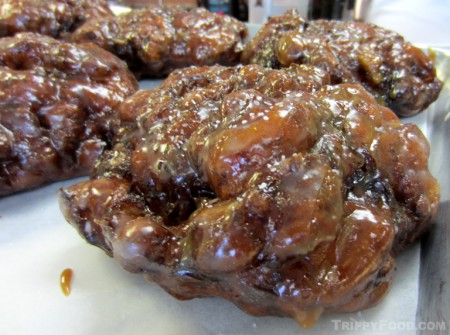 Sticky Monkey, about as big as your head

The insect presence in the Worm Hole is more subdued – only a single meal worm stands at attention atop the doughnut in a loving tribute to the maguey worm that lies pickled at the bottom of a bottle of mescal. The light tequila-infused cake doughnut has freeze-dried jalapenos mixed into the batter (after several rounds of experimentation, Levi found that freeze-drying and then reconstituting the jalapenos prevents the doughnut from turning to mush in the cooking process). The ring is glazed with a lime icing and a cross-hatching of key lime and then lightly sprinkled with margarita salt with a Mexican-spiced Larvette rising to the occasion on the light green frosted landscape. The kick from the jalapeno is more pronounced than with the Chirp Derp’s chipotle, but it gets tamed by the frosting (whose citrus tang is perfectly accented by the hint of salinity). Both the Chirp Derp and Worm Hole are available on special occasions (such as Halloween or National Doughnut Day), but they are a special treat not to be missed and a unique experience and delicious entry point into the world of entomophagy.

There are currently two stores in the San Jose area, but with Psycho Donut’s rise in popularity they may find themselves having to expand to meet the demand. In Silicon Valley, to miss a visit to Psycho Donuts would be just plain crazy.

2 Responses to You Think I’m Psycho, Don’t You Mama?