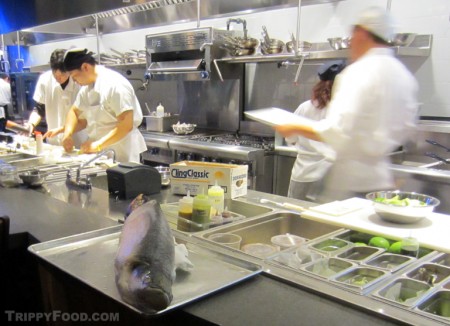 A paiche stands guard over the busy kitchen

The fish approaches slowly, methodically – at three feet in length, the torpedo-like paiché (more commonly known as arapaima) is yet a juvenile, but his hinged jaw is capable of wreaking havoc on the waterway, the Steven Tyler of the pescatorian world. The armored paiché can breathe air, and it surfaces regularly to gulp oxygen; as it gets closer you detect a look of purpose in its cold, cloudy eyes and breathe a sigh of relief knowing that Chef Ricardo Zarate is bringing the recently deceased leviathan out on a tray to illustrate the namesake for his newest restaurant in Marina del Rey, California – Paiché Peruvian Izakaya. Asian (particularly Japanese) culture has influenced Peruvian cuisine over the years, and Paiché honors its inspiration by serving small, sharable plates with free-flowing libations in a sleek and modern room with an open kitchen and posts decorated with painted-on fish scales. 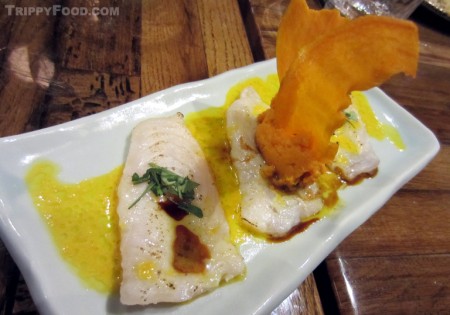 In addition to lending its name to the restaurant, the paiché is also featured as a main dish on the abundant menu. The fully-stocked bar jutting out into the front of the space at a crazy, impossible angle concocts a variety of alcoholic beverages with a Peruvian slant, such as the spicy and citrus Lima on Fire as well as traditional drinks designed to complement the dozens of dishes that seem to readily manifest themselves from Chef Zarate’s imagination to the plate. The options are as artistic as they are flavorful – the front-end of a massive, crispy, fried Santa Barbara amaebi shrimp appears to jut out from a plate while the meaty tail supports it wrapped in a column of filo dough and accented with jalapeno ponzu dressing; a quinoa salad supports a variety of wild mushrooms with a mousse of the fungus and huacatay sponge that the diner mixes tableside. 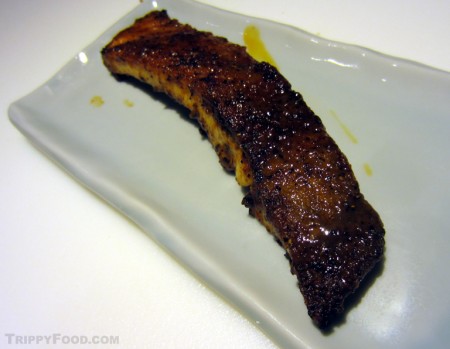 The paiché is reduced to small, business card-sized filets that are seared with a blowtorch and then accompanied by an aji amarillo and lemon vinaigrette and tamari on shallow pools of sweet potato mousse – it is buttery and light with a unique flavor surprisingly unlike what you might imagine a giant river fish to taste like. High in protein and Omega-3s, yet light and low in fat, the paiche is a healthy yet delicious foray into an otherwise undiscovered cuisine of the Amazon. Zarate’s arsenal also includes the piranha’s less-bloodthirsty cousin, the pacu – the fish resembles its notorious cousin in appearance (save for its almost human-like teeth) but grows to lengths of up to three feet. Although several deadly attacks have been reported, the pacu is generally more mild-mannered than the piranha, and because of its size is a more bountiful source of food (both in the Amazon and at Paiché).

On the night I sampled the pacu rib meat, Chef Zarate prepared it with an aji anticucho marinade and a miso glaze finish – the cut was pan fried very simply and the result was a dish that resembled a pork rib and melted like pork belly with a crispy, seared skin. The pacu is Zarate’s secret weapon – even though diners will want to enjoy the restaurant’s namesake fish, the pacu is a superlative dish that will generate a great deal of talk in Los Angeles gastronomic circles. 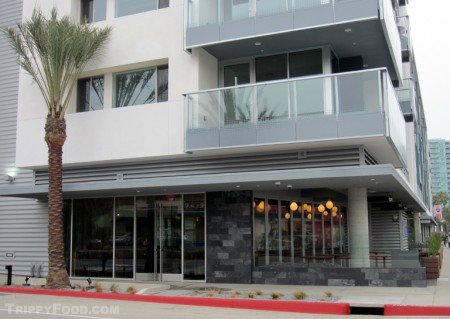 Paiché opens April 12 and is poised to be one of the most anticipated restaurant events in 2013; with something to satisfy every taste and unique and exotic seafood offerings, the newest addition to Chef Zarate’s empire will be the hottest ticket of the season. Be sure to experience both the paiché and pacu – eat them before they eat you.