Proud As A Peacock 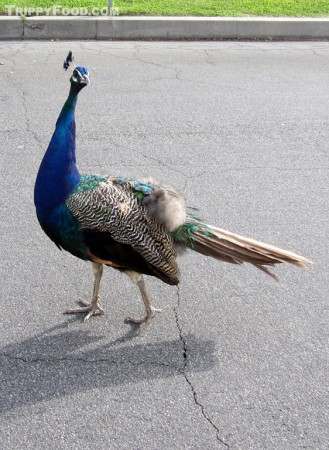 One of the flock of now-wild peacock in Arcadia CA

Very few of the animal kingdom’s royalty flaunt their status in such resplendent pageantry as the peafowl – the male of the species is easily recognized promenading its flashy, iridescent, feathery finery in a mock display of pomp and circumstance. The female of the most common variety (the Indian, or blue peafowl) is rather dull in comparison to her gaudy mate, but both genders are held in such high esteem that the blue peafowl has been designated as the national bird of India (owing to its naturally-occurring range) and is protected under India’s Wildlife Act (killing one can land you in the birdcage from between three and seven years, with additional fines of up to 25,000 rupees). In addition to the peafowl’s status in Hindu culture, the bird has been regarded as guardian to royalty in Persia. Peafowl have historically been featured as banquet guests to the elite, but despite their regal designation have more often than not been included on the menu rather than the guest list.

In medieval England, the birds would be kept on estates and prepared for special occasions by removing the skin with the feathers intact; the bird would be roasted and then re-dressed in its plumage so that it would be presented at the table in full regalia prior to eating. In 1971, Iran’s Shah Mohammad Reza Pahlavi held a week-long celebration to commemorate the 2,500th anniversary of the founding of the Persian Empire by Cyrus the Great. The five hour-long blowout (regarded by Guinness Book of World Records as one of the most elaborate banquets ever held) featured 50 roasted and redressed peacocks stuffed with foie gras, and served with quail and a nut and truffle salad Musigny Conte de Vogué 1945. The bird is not as widely consumed in modern times, but due to their reputation as watchdogs (they emit a piercing scream when threatened) and outrageous display of color, they have been introduced as free-roaming livestock on estates world-wide. 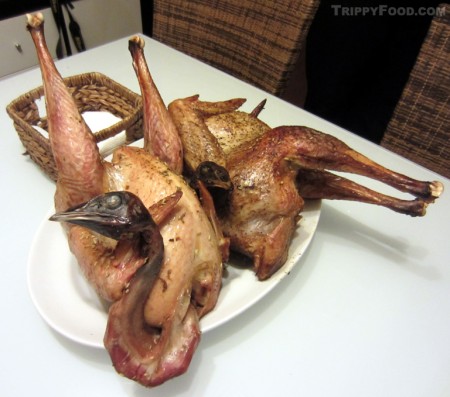 Juicy roasted peacock, crispy on the outside

As any visitor to the Los Angeles County Arboretum and Botanical Gardens in Arcadia, California will attest, the grounds and much of the surrounding neighborhood is swarming with a colony of now-feral peafowl that are the descendants of a modest flock of less than 50 purchased by Elias “Lucky” Baldwin in 1880. The birds were brought to the sprawling property known then as Rancho Santa Anita, with Baldwin being credited as one of the first to bring these magnificent birds to the United Stated. Baldwin’s daughter Anita began selling off the lands after his death in 1909, and eventually the County of Los Angeles purchased 11 acres in 1947 to establish the arboretum – it is impossible to walk the grounds or even drive through the surrounding neighborhoods without seeing or hearing the birds (the cafe at the Arboretum bears the name “The Peacock Cafe”, although the ostentatious poultry isn’t featured on the menu).  Another large colony exists in the Portuguese Bend area of Palos Verdes, California – the origin of the flock is disputed, having been attributed to a gift to Frank Vanderlip, either from “Lucky” Baldwin’s stock or from William Wrigley’s aviary on Catalina Island in the early 1920s. The city set free a certain number of peafowl in the early 1960s, with the birds becoming somewhat of a nuisance to where they are often referred to as “Palos Verde pigeons”; although the male’s elaborate train of tail feathers give the appearance that the bird is flightless, they spend considerable amount of time in trees and are quite capable of flight. 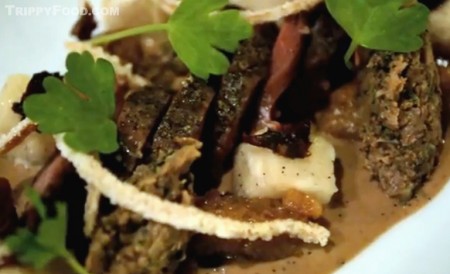 Peafowl as food is becoming a more commonplace occurrence world-wide, particularly in China – one company (Jiangxi Zong Technology) maintains the world’s largest stock of peafowl for breeding and consumption. Skinned or feathered, the sex can easily be determined by single spikes on the peacocks’ legs which are used for defense and to ward off rivals during mating. Because of modern health concerns, the birds are commercially available skinned or plucked (although there is a lucrative market for the feathers as well). The meat is exceptionally lean, and any cooking preparation should be preempted by brining for at least a day – thin layers of connective tissue in the meat can make the bird somewhat chewy. The flesh has a unique, mild taste, and aromatics are discouraged if you truly want to experience the true flavor of the peafowl. I’ve slow cooked and roasted whole birds sourced from ExoticMeatMarkets.com and have used the tongue, liver and heart as a mystery ingredient for Episode 2 of Kamikaze Kitchen and have enjoyed both preparations.

There is no reason to perpetuate the common misconception that peafowl are inedible – they are as delicious and nutritious as they are beautiful, and can be prepared using similar methods as with other large birds such as geese and turkey. Think of how regal you’ll feel sitting down to a sumptuous feast of peafowl served on a TV tray while watching NBC.

GALLERY: See images of peafowl Val has prepared and Chef Kyle Schutte creating a dish of hearts, liver and tongue for Kamikaze Kitchen

2 Responses to Proud As A Peacock