The Only Dead Chef Is A Good Chef 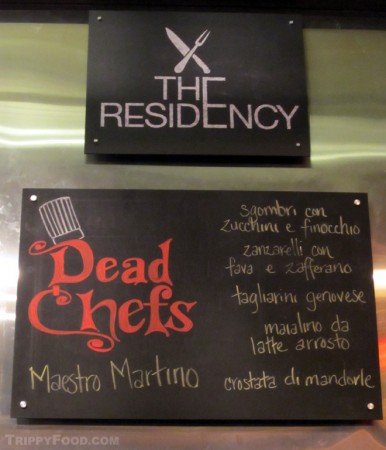 The Dead Chef series at Unamicatessen in Los Angeles

The Media Age has created a glut of celebrity chefs that are known more for their eccentric behavior, brash, on-camera demeanors, and globe-trotting searches for the most elaborate, exorbitant or bizarre dishes than will be remembered for creating landmark signature cuisine.  L.A.’s Umamicatessen hopes to bring to light some of the great trail-blazers that have since packed their Wusthofs and Globals and headed off to The Great Kitchen in the Sky with their 10-week series, Dead Chefs at The Residence, from Maestro Martino de Rossi of Como (born 1430) through Sylvia Woods (who died in 2012). The dinner homages will be held every Thursday night during the 10-week run with a variety of L.A.’s brightest and best recreating menu items and cookbook entries from each chef.

I recently attended one of the events where the fare was derived from the cookbooks of the Western world’s first celebrity chef, Maestro Martino. His 1465 cookbook, Libro de Arte Coquinaria (which you can still get on Amazon, albeit not the hand-printed version) is recognized as one of the best records of the transitional cuisine between the medieval and renaissance periods, and he was renowned for his residency at the Vatican (“Yo, Pope, grab me a zucchini, willya?”). Martino’s dishes were lovingly reproduced by former Mezze chef Micah Wexler, who added a bit of modern flair to a few of the dishes while maintaining the integrity of Martino’s original concepts. 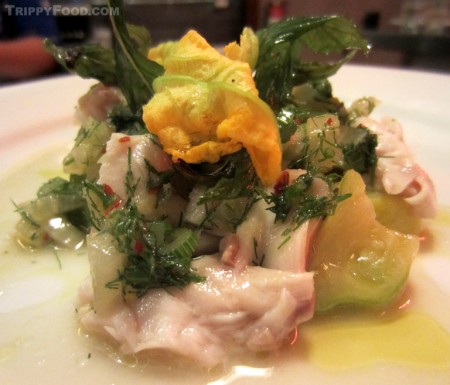 Chef Wexler opened with a light Sgombri con Zucchini e Finocci – Maestro Martino’s recipe called for mackerel, but Wexler substituted with a very clean and fresh tasting smoked black cod finished with a fennel sauce and accompanied by crispy fried Persian mint and firm chunks of zucchini (capped with its blossom).  Secondi was a warm, golden bread soup (Zanzarelli con Fava e Zafferano) that featured blended and whole fava beans and saffron that resembled an Italian egg drop soup. Wexler explained the origin and preparation of each dish as he assembled them from behind the counter and honored his homework by answering patrons’ questions about the meal.

Since Martino was an innovator and somewhat of a historian when it came to pasta, Chef Wexler opted for a Genovese Tagliarini featuring handmade pasta with mozzarella and parmigiano cheese and a firm arugula-based pesto that was glopped on top of each serving to be mixed by each diner on their own plate. Since Wexler eschewed the familiar basil for arugula in the pesto, the copious green goo did not overpower the flat noodles. The main event was a roasted suckling pig that was rolled and stuffed with its own flesh to where it looked like some bizarre version of the Fiji Merpig. The swine was sliced into thick, cross-sectioned slabs that were topped with herbs and drizzled with a sauce made from Il Porco’s innards; each serving was aromatic and tender, offering multiple tastes from the variety of cuts interred before roasting. The dark red skin crisped up to a nice chicharrón and Chef Wexler graciously carved the snout, ears and tongue and plated it along with the head for our enjoyment (naturally, I recovered the eyes which were quickly devoured). For dessert, Wexler prepared a crumbly Crostata di Mandorle, a pastry that was somewhere between marzipan and a date-accented almond shortbread with a dollop of whipped cream and a light application of coffee sauce. 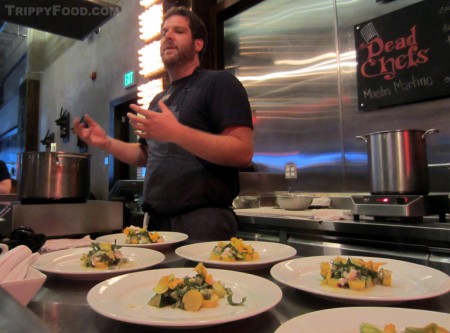 The meal was a gourmand’s voyage into the past, an educational opportunity to savor the resurrection of cuisine from a by-gone era. The series is not to be missed, but you need to be forewarned – don’t expect a ghostly meet-and-greet afterwards.

GALLERY: See images from Val’s dinner with Chef Micah Wexler at The Residency at Umamicatessen in downtown Los Angeles