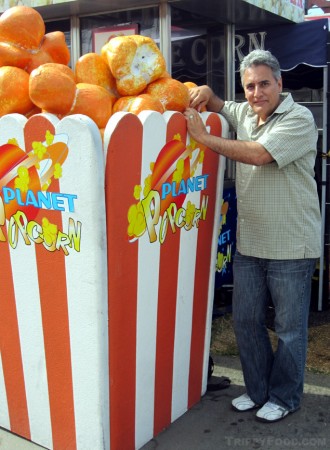 Working on the small size popcorn at the OC Fair

The Orange County Fair is an annual event that evokes a range of emotions, from eager anticipation of what gastronomic Frankensteinian contraption will be the talk of the county fair season to fear and dread of indigestion. Although Chicken Charlie’s traveling semi of deep-fried comestibles is usually the front-runner in a race for the most outrageous dish, the competition is fierce, with the only clear winner being the fairgoers themselves. The OC Fair consistently steps up its culinary game, with head-to-head knife fights between prestigious Orange County chefs, a proliferation of food trucks, cooking demonstrations from celebrity chefs, artistically-carved food by Chef Ray Duey, and the sideshow cavalcade of food we’ve come to expect from the gala end-of-summer event.

With a single week left of the 2013 season, there’s still much to see at the OC Fair, including Noah’s share of animals (with a camel milking demonstration), top-name musical draws at the Pacific Amphitheatre (as well as talented tribute bands at The Hangar), a new bug exhibit called Dr. Entomo’s Palace of Exotic Wonders, and more food than you can shake a hot dog-on-a-stick at. Regulars such as Chicken Charlie’s, Biggie’s Meat Market, Juicy’s, Bacon A-fair and others make their annual appearances, unveiling new dishes such as the formidable Krispy Kreme Sloppy Joe; a 2 foot-long smoked sausage with the double-entendre title of “The Biggy Sausage”; Pink’s Ghirardelli dog, a wiener caressed with cream cheese, honey mustard, crumbled bacon and dark chocolate; a bizarre red velvet cake-on-a-stick; Australian Battered Potatoes; and the surprisingly tasty bacon-wrapped, deep-fried pickles from Chicken Charlie. 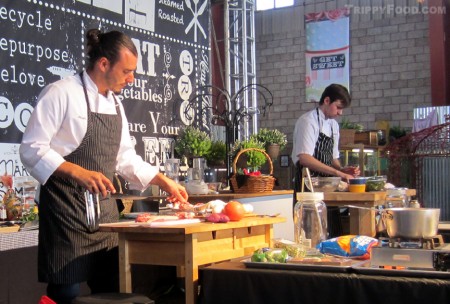 There’s far too much to encapsulate in this post, so I’ll let the pictures speak thousands of words – make every effort to navigate down to the Orange County Fairgrounds in Costa Mesa, California before they start leading the world’s largest horse up his ramp and calling doors down on the food trucks at one of California’s most beloved county fairs. Give your gastroenterologist the day off, let the side show begin, and don’t forget your Maalox chaser – the 2013 Orange County Fair is yours for the taking through August 11.

NOTE: This cost for the fair admission and food was provided by the Orange County Fair. The content provided in this article was not influenced whatsoever by the organizer of the event.