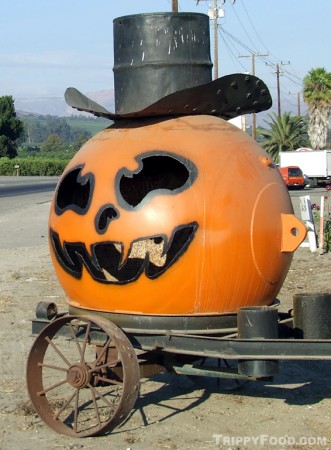 Although durian bears the title of the King of Fruit, the true crowned monarch is the world’s largest fruit, the pumpkin. Most people casually disregard the pumpkin as being only good for jack-o-lanterns and pies, but like other squashes, the pumpkin lends versatility and flavor to a wide variety of dishes including soups, side dishes and pastries with the flesh, seeds, flowers and leaves all being edible. Pumpkins come in a variety of sizes, shapes, colors and textures, with every one of them being edible (although some of the ornamental varieties are somewhat lacking in taste). They are thought to originate in North America, but have been easily cultivated worldwide; the U.S. still grows and consumes more pumpkin than anywhere else in the world. Pumpkins keep for a while if the thick outer skin is unbroken, but once that has been compromised eating the fruit is not advised (your best bet is to throw that jack-o-lantern on the compost heap on November 1st). Since pumpkins typically reach maturity in the fall, that’s the best time to find them in grocery stores and on “seasonal” restaurant menus from early October through Thanksgiving Day. Fortunately you don’t have to live in New England to enjoy pumpkin in autumn dishes, but if you do you may have a hard time getting an iced tea to go with it. 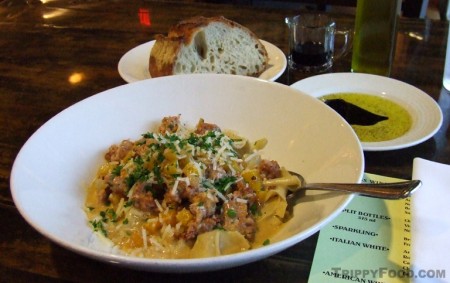 Around the same time leaf-peepers are swarming through the woods of New Hampshire and Vermont with their SLRs at the ready, the leaves are also changing color in the Northwest, and in the Portland, Oregon area pumpkin rears its big, fat head in clever and delicious ways in many of the area restaurants. Typhoon (CLOSED), a local upscale Thai chain features several seasonal items, but the most spectacular is their pumpkin curry dumplings. The fried dumplings have an al dente chewiness to their skin, and each bite releases the creamy pumpkin inside. The dumplings wade in a sweet and slightly spicy pumpkin/curry sauce that demands sponging up with bread after the dumplings are done. A few doors down from Typhoon at The Round in Beaverton is MiNGO, an Italian bistro that features what I consider to be the ultimate autumn dish – coniglio. Although the name sounds like a skin disease, “coniglio” is Italian for rabbit, and this outstanding dish features a ground rabbit sausage, northwest mushrooms and chunks of pumpkin over wide, flat noodles and lightly drenched in a sage cream sauce. Just the aroma instantly transports you to the woods, where you can imagine yourself chasing the rabbit through freshly fallen leaves in the crisp autumn air; the experience gives way to the taste of victory with every savory, earthy bite. The combination of textures and flavors is what fall would taste like if you could capture it in a Mason jar. 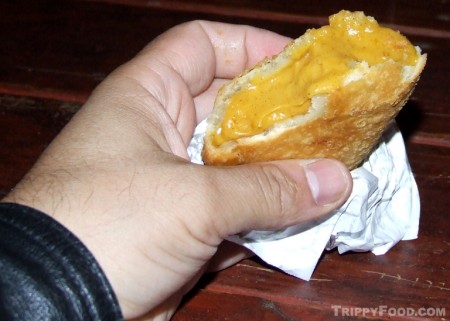 After either splendid meal, a venture to one of Portland’s few late-night food cart pods is in order for dessert. The aptly named Cartopia at the corner of Southeast Hawthorne Boulevard and Southeast 12th Avenue features one of Portland’s highest-rated and most talked-about food carts – Whiffies Fried Pies. The pod features a stand specializing in crepes, a Mexican cart, and other vendors dealing pizza and French fries, but Whiffies seems to be the cart Portland is talking about. They have a very simple menu, featuring a rotating variety of fried pies (about the size and shape of empanadas), including a mixed-berry pie that contains the oddly named Marion berry (which sounded eerily like Washington D.C.’s famous crack-smoking Mayor, Marion Barry). Lest I digress, this is an article on pumpkin and fall cuisine, and I was on a quest to try the seasonal fried pumpkin pie. My first bite into the thick flaky crust released a flow of spiced pumpkiny lava, which was rich, creamy and delicious. About halfway through the pie, the hot gooey filing refused to be contained and I ended up with a generous dollop on my pants, but it tasted so good I was tempted to recapture the spilled filling. It was a new take on a classic dessert – one I could easily get used to. 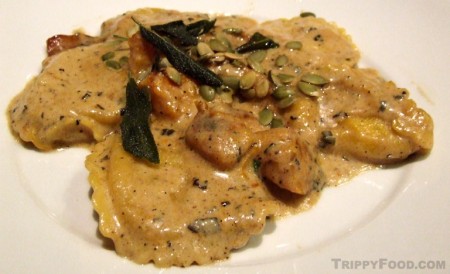 Pumpkin ravioli with chunks of pumpkin and seeds

Many L.A. area restaurants also roll out their fall menus, and at Culver City’s Rush Street pumpkin elbows its way throughout the menu. At a recent media dinner to coincide with the ongoing Culver City Block Party they had decorated the outside of the restaurant with scarecrows, pumpkins and faux-fall foliage. While deciding how to get my pumpkin on I considered several fall-influenced cocktails including their own green appletini and a frothy, whipped-cream infused pumpkin martini; although I had a taste of both I opted for the pumpkin ale from Buffalo Bill’s Brewery, which unfortunately only seemed to be pumpkin-colored (although not a bad ale, I feel like I drank a pig in a poke). I kicked off the meal with a bowl of rich and creamy soup featuring pumpkin’s second cousin, butternut squash. The thick, hot soup was naturally sweet, warming and welcome on the unusually brisk southern California fall evening. As far as substantial menu items go, the obvious choice was the pumpkin ravioli. While similar in appearance to the pumpkin curry dumplings at Typhoon, that’s where the similarity ended – there wasn’t a dramatic contrast between the pumpkin filling and the ravioli pasta and although it was slightly spiced with sage it was mostly sweet. Naturally no pumpkin adventure would be complete without a slice of pumpkin pie, and although there didn’t seem to be a landmark departure from the traditional telling, it did not disappoint. 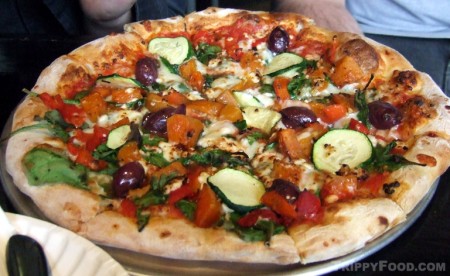 The Zucha pizza with pumpkin at Lucifers

As covered in a previous article, Los Angeles’ Lucifer’s Damned Good Pizza features pies year-round topped with pumpkin: my personal favorite, the pumpkin and prosciutto with roast garlic, basil and spinach, and the Zucha (featuring pumpkin, olives, feta, zucchini, red bell pepper and spinach). Although I’m not certain if the luscious pumpkin tart from L.A.’s tartist is available year round, the rich dessert is the perfect end for any homemade fall meal – more information is available in the article on Artisanal L.A, where the tartist held a commanding presence. Because pumpkin is so versatile, it is easy to include it in meals cooked at home. It can be used as a substitute for potatoes, mashed, steamed – the possibilities are limitless. If cutting up a pumpkin to be used as an ingredient seems too much like work, you can take the easy way out and buy canned pureed pumpkin, but for flavor there’s no beating fresh. Pureed pumpkin added to pancake batter makes a wonderful seasonal breakfast or the basis for cupcakes and breads. Over Thanksgiving I created a dish I call (for lack of a better term) Puritan Chow; the concept was to make a side dish composed of only ingredients the English settlers and Wampanoag people would have had access to in 1621, which research shows to be not as easy as it sounds (sweet corn, potatoes and cranberry sauce were not readily available at the time). I finely chopped turkey and fried it, adding in diced pumpkin that was parboiled for 2 minutes. While cooking the two primary ingredients, I added in cranberries, raisins, green onions and finally shredded spinach and pumpkin seeds at the end. Those who sampled the dish seemed to like it, but I hope they weren’t being polite; since I’ve purchased several pumpkins to cook over the next few weeks I will probably try a version with venison and a vegan version and serve it in a baked whole pumpkin. 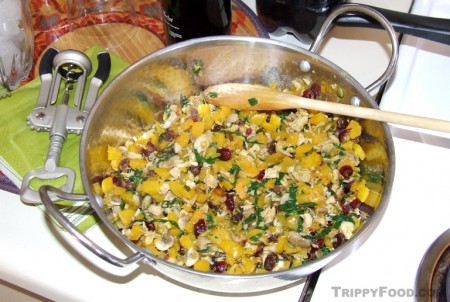 Fall ends officially late in December, so take advantage of the availability of this delicious fruit. When next October rolls around, consider purchasing several pumpkins – one for carving and the others for your culinary enjoyment; you’ll be gobbling it down like there’s no tomorrow.