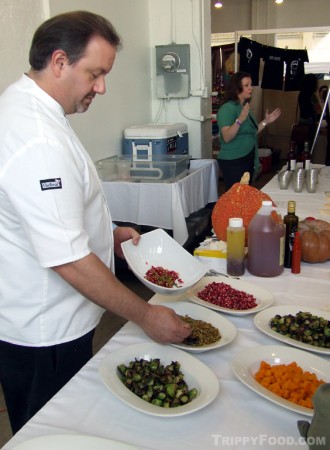 The recent inaugural Artisanal LA event held at Los Angeles’ Cooper Building ambitiously set out to be a collective of local restaurants, farms, artists, horticulturists and other artisan goods offering samples and selling their wares under one roof. The fall event featured demonstrations and discussions over a two-day period, and if the event’s sold-out status was any indication, it was a rousing success. The brainchild of Sauce LA’s Shawna Dawson (who also co-conspired to present this year’s LA Street Food Fest at Pasadena’s Rose Bowl), Artisanal LA promised to wear out your shoes and satisfy your senses for the better part of the afternoon. Held in the expansive space high up in the Cooper Building, the grid layout paired chocolatiers, urban farm collectives, beekeepers and bakeries in an overwhelming display of hand crafted, sustainable goods. Some booths attracted attendees from across the hall with enticing aromas; Rashida Purifoy’s Cast Iron Gourmet was like the pork pied piper, filling the air with the come-hither of cooking bacon, candied and used in the copious samples of trail mix. That’s A Nice simply opened a jar of their whipped, roasted garlic, which worked better than a GPS unit to get people into their booth. More substantial fare was found as well; savory and hearty individual meat pies were available from Flying Pie Man Yuichiro Sato, whose ground beef pie took top honors for best savory pie at this year’s KCRW Good Food pie contest. Little paper cups and small bites of tasty treats and beverages were available from vendors throughout. Homegirl Industries offered a vat of green liquid that looked like a movie prop; their spinach and mint limeade only looked intimidating, but in fact was sweet, cool and surprisingly refreshing. For those looking for more traditional micro-brewed beverages, Jeremy Raub, owner of Eagle Rock Brewery was on hand to squirt out cups of their Imperial Amber Wit and Solidarity Black Mild beer, which was also available for tasting during a panel discussion with Brian Lethcoe of Nibble Bit Tabby Brewery and moderated by The Beer Chicks. 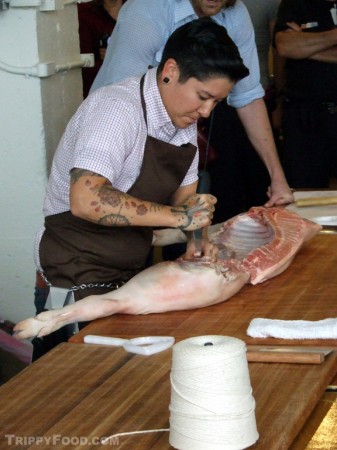 Butcher Erika Nakamura (Grundy) breaks down half a pig

As part of a “biodynamic” wine pairing demonstration, Chef Joseph Gillard of Napa Valley Grille threw together an incredibly popular fall salad featuring cubed squash, pumpkin and pomegranate seeds and roasted Brussels sprouts, tossed with a basic apple cider vinaigrette dressing. Mixologist Blake Edwards created beautiful and lush garden cocktail infusions placing cut herbs, vegetables and fruit in clear bottles and then dousing them with vodka, water and rum. These would have been amazing kitchen decorations, but are designed to be consumed before the flavors overpower the spirits, and eating the drunken vegetation is highly discouraged. Of all the demonstration, the most attended and captivating was the butchering demonstration by Lindy and Grundy – across three butcher blocks, they reduced half a young pig to paper-wrapped cuts including trotters, chops, and skin for chicharrón in just under 20 minutes. After the hog was packaged to go, the cuts were distributed to the crowd (I went home with a substantial parcel of pork belly). Watching their flying knife-wielding hands hard at work whetted my appetite for desert; a sparse booth manned by Tartist featured an astoundingly delicious looking and smelling pumpkin tart that needed eating. I purchased a slice of the shallow graham cracker crusted pastry, which tart baker Xárene offered to box for me until I told her that it wouldn’t last that long. Between the samples and the food items I purchased I was too stuffed to jump, continuing to attend the demonstrations and discuss food preparation with the folks in the booths. 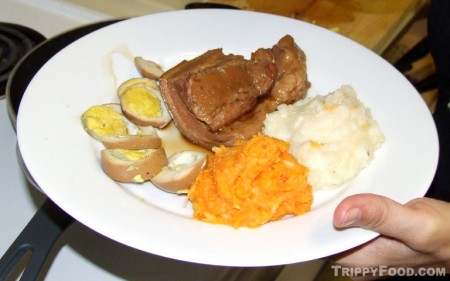 Just before I left I was approached by Jill Flomenhoff of Bangers and Smashed, who offered me a container of her coconut candied yams and garlic and sour cream mashed potatoes, which I knew would be the perfect side dish to go with the pork belly Lindy and Grundy gave me. Claudia prepared the pork belly using a Chinese recipe, although we cut some corners since we didn’t have any star anise on hand and lacked several other ingredients. The pork fell apart, full of the flavor of the young hog and the ingredients it was cooked with, and the potatoes complemented the meat perfectly. The yams were sweet without being sugary and the shredded coconut added an unusual flavor and texture I hadn’t experienced before. Although the garlic mashed potatoes had more of a whipped consistency they were still flavorful, but a little light on the garlic.

The event was held to benefit St Vincent Meals on Wheels, Woolly School Gardens and LA Regional Food Bank; it was a good feeling to support local artisans, see money raised for a good cause and enjoy the sights, smells and tastes of what are truly works of art. I think the great Leonardo da Vinci said it best when he exclaimed, “That’s-a-nice!”… or was that Leonardo DiCaprio?

NOTE: Admission fee for Artisinal L.A. was waived in exchange for volunteering for the event. The content provided in this article was not influenced whatsoever by the organizer of the event.