Where The Streets Have No Name

The Rose Bowl becomes the Meat and Veggie Bowl

In terms of U.S. cities, L. A. has one of the largest street food cultures, made popular by the ubiquitous taco trucks and expanded by the somewhat recent gourmet food truck phenomenon. Besides the vehicular street vendors, there are also an army of push cart and folding table vendors, as well as fledgling restaurants springing forth from aspiring chef’s homes and spilling out on to the sidewalks and streets of L.A. The problem these days isn’t how to find something to eat, but how to select a single vendor to satisfy the munchies. Shawna Dawson and Sonja Rasula aspired to bring a seemingly random collection of these vendors together in one place, and to raise money for charity to boot. Dawson and Rasula are co-founders of L.A. Street Food Fest, which held its second extravaganza recently in Pasadena’s fabled Rose Bowl. Before you conjure up images of Kogi’s tires ripping up the finely manicured gridiron, the trucks were parked just outside the stadium with tented booths lined up on either side of the field. Food truck vendors cohabitated with restaurants, pushcarts, taco shacks and caterers essentially leveling the playing field to place the focus on the food, not the delivery system. Truck operators ran (literally) through the tunnels to their trucks where the food was being prepared, while other vendors cooked at the back of their booths or at makeshift kitchens in the bowels of the stadium. 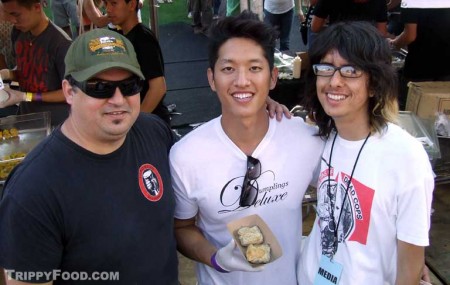 In the open sun, the food wasn’t the only thing baking, broiling and frying – at the end of the field were two makeshift biergartens where Singha cooled off diners with one of the few cold beverages available (the only water available was from the fountains outside the restrooms). Along the walkway on the second tier, various food vendors set up shop sandwiching in tequila bottlers offering tastings in half-sized shots. A section outside to the right of the stadium featured vendors of non-food items and a small (but very popular) section where ice cream appeared to be the only thing actually served out of trucks. Attendees holding VIP tickets were granted access to the event at 4 PM before the teeming masses yearning to eat, yet the lines continued to grow, even before the 6 PM general admission crowd swarmed in. As if this amazing variety of unique and delicious food wasn’t enough, a DJ spun music to dine by followed by bands Warpaint and The Deadly Syndrome (who provided live music on a concert stage at the end of the field). Throughout the event, the stadium’s Diamond Vision screens were displaying tweets sent to @LAfoodfest, utilizing the system that put many of the food trucks on the map to the instant gratification of the iPhone-laden vendors and patrons. 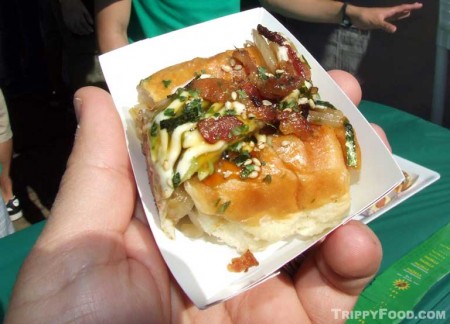 The Dogzilla - amazing or what?

Although it would be impossible to represent all the great eateries, carts and trucks, this giant tailgate party on the field had so many vendors to choose from that even Takeru Kobayashi wouldn’t be able to keep up. Most vendors provided smaller-sized samples of the two or three items that represented the best of the best, and some changed the menu up during the course of the event. If you attended the LA Street Food Fest or are one of the featured vendors, please forgive any omission here – there just isn’t enough space to cover everybody and all the food provided. We might as well begin with names you’re familiar with from previous Trippy Food articles; the omnipresent Alex Chu manned not one booth but two, providing tidbits from his Dim Sum Truck as well as items from his newly launched Dumplings Deluxe truck, including the wildly popular cheeseburger dumplings (an odd co-mingling of cultures in a little dough wrapper). Chu used the event as the coming-out party for his newest Dim Sum Truck offering, Vegan Sticky Rice, which although tasty made me long for the missing meat. Also manning (in a manner of speaking) two booths, Gueleguetza’s Bricia Lopez presented pork cemita “sliders” topped with onions, Oaxacan cheese, avocado and a spicy chipotle sauce from her Huntington Park restaurant, Pal Cabron, as well as nieves (Mexican ice cream) from the new Naturabar featuring such exotic flavors as cactus pear and leche quemada (burnt milk). A photo opportunity wall with cutouts to allow your face to grace a cartoon hottie outside the Pal Cabron booth got liberal use from patrons waiting in the long line. 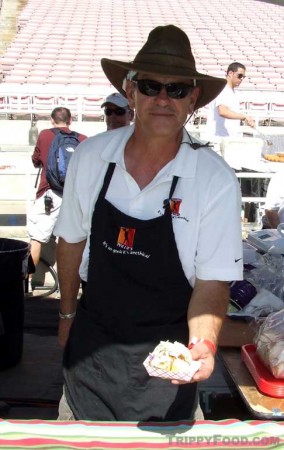 Brazilian upstarts Ta Bom dished out slightly smaller versions of their signature coxina that were cooked to perfection and every bit as good as my first. I had the opportunity to try the pastel, which I didn’t sample on my initial visit to the truck; although these flat, crispy treats are usually accompanied by meat or sweet topping, the vinaigrette I topped it with added flavor without overpowering the simple delight. Ta Bom’s booth was lavishly decorated and featured a scantily clad woman decked out for Carnival, but the line was backing up for the food rather than the scenery. The long queue for The Grilled Cheese Truck was obvious, since their booth was perched on the second tier of the stadium – owners Dave Danhi and Michele Grant spent the first part of the day at a similar festival in Long Beach and then hauled ass across town to serve their signature sandwich brimming with pork, macaroni and cheese at the LA Street Food Fest (reminiscent of Phil Collins doing both the Wembley and JFK shows at Live Aid). Bill “Smokin’ Willie” Kelley received a call only a week before the event inviting him to participate, but he delivered with a pulled pork slider that was every bit as mouth-watering as when he first launched. I asked him if hitting the streets had prompted him to alter his menu, but he has only changed a couple of items including adding his hot link slider with grilled onions to the regular menu. He asked if I wanted coleslaw on the sandwich, which made it taste like the Alibi Room’s pork and kimchi slider’s American cousin; a few French fries and I would have had a mini-Primanti Brothers snack, but the sandwich didn’t make it to either the Frysmith or Fresh Fries booth intact. 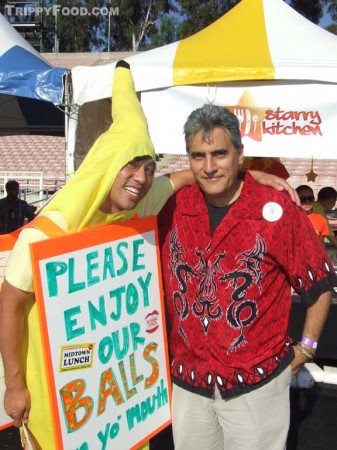 In addition to the tried-and-true favorites, my street food horizon was broadened tenfold with the wide variety of new selections to the point where I had to decide what I was going to pass up. My first choice was obvious – Nguyen Tran stood outside his Starry Kitchen booth dressed as a banana and wearing a sign reading, “Please enjoy our balls in yo’ mouth.” The balls in question were crispy tofu balls, which admittedly don’t sound very exciting until you see them for the first time. The sphere is surrounded by a crispy neon green coating that makes it look as though it’s encrusted with kryptonite; a bite into them reveals a delicious, creamy tofu center. Tran received a specially created “Best Showmanship” award, a classic case of the presentation taking the attention away from what turned out to be a wonderful little dish, although receiving a tie vote for the People’s Choice Award later vindicated him. Not bad for a couple who started by serving food out of the back of their apartment! I lost my boba virginity to The Mighty Boba truck – their milk tea boba was cool and creamy, but I wasn’t prepared for the texture and the chewiness of the tapioca pearls, dyed a dark color with brown sugar. I chased the boba with one of their curry potato balls (a simple variation of the Cuban potato ball) with just enough curry for flavor. The sleeper had to be Dogzilla’s namesake offering; a high quality all-beef hot dog “slider” topped with avocado, crumbled bacon, onions, Japanese mayo and furikaki and lightly doused with teriyaki sauce. I had to wait briefly while they made up a batch of Yakisoba dogs, which features a hot link topped with noodles, okonami sauce, ginger and nori, and although there was considerable flavor, I wasn’t sure the spicy wiener complemented the toppings well. The server didn’t know if either of these were the equivalent of the elusive Japadog, having never heard about it; although the Yakisoba was decent, I would crawl naked over broken vinegar bottles to have another Dogzilla. 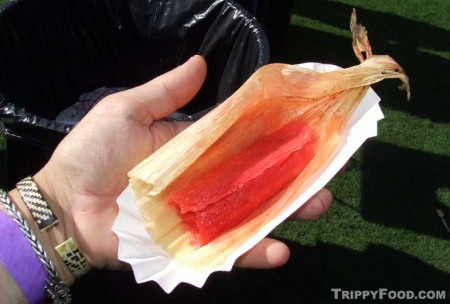 The lovely and sweet strawberry tamale from Tamales Elena

Best Old School winner Chef Robert Danhi offered a very simple, fresh mouthful dubbed the Explosive Thai Bite. The raw snack consisted of onions, ginger, tiny shrimp, chopped limes and several other ingredients wrapped in a single wild pepper leaf, which Chef Danhi instructed to eat all at once. Each bite released a different flavor and the crispiness of the raw, fresh ingredients only enhanced the experience. I’m no stranger to sweet tamales, but Tamales Elena knocked my socks off with their strawberry tamales. Instead of big chunks of strawberries embedded in the masa, the berries were blended in, giving the tamales a bright pink color and a sweet taste without being sugary. The Manila Machine offered up a pork belly and pineapple adobo over rice that was tender and flavorful and a decent lumpiang shanghai (a pork, carrot and ginger fried spring roll). I asked one of the proprietors about offering balut, to which he replied that he is considering an event but wants it to be traditionally respectful (as respectful as you can be while chowing down on a duck fetus). Scoops’ spin-off ice cream parlor, Scoops Westside hasn’t officially opened yet, but they still had a presence at the festival. With flavors such as pistachio cardamom, mango sweet orange basil seed and tamarind pear rum sorbet it was difficult to choose, but I finally opted for the cool and creamy Thai iced tea coconut. 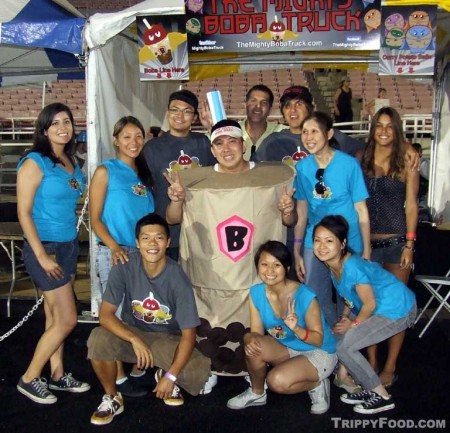 The team from the Mighty Boba Truck

I had volunteered with LA Street Food Fest to work at the event, so after a couple of hours getting my grub on I reported for duty to find out what my assignment was. I was somewhat surprised that I was given the task of taking pictures, but roamed about the stadium photographing everything and everyone. I walked past the long lines to the front so that I could capture images of the food in glorious Technicolor, and as a true journalist would ask about each particular food item. Unfortunately this resulted in me being offered more food, which I felt compelled to decline, not because I had elbowed my way to the front, but because there physically was no additional room in my digestive tract for anything else – I felt like Roberto Duran after a steak dinner. Winners were announced at the end of the night by one of the judges, L.A. Mayor Antonio Villaraigosa – other judges included Top Chef Master, Susan Feniger; LA Times Food Editor, Rene Lynch; Grey’s Anatomy actor Jesse Williams and Chef Walter Manzke. After a brief set by L.A.’s Warpaint, there was nothing left to do but disperse the crowd, as the Rose Bowl takes their schedules seriously. Nothing to see here, folks. Go back to your homes, and tell your kids this is what happens when you eat your way into a food coma.

2 Responses to Where The Streets Have No Name