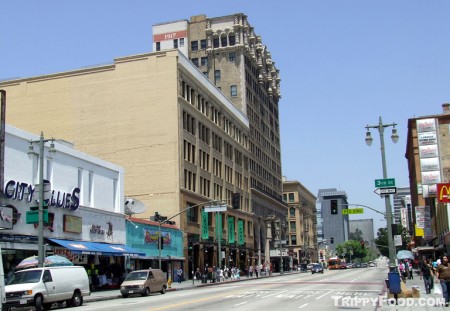 I have to wonder why many writers in Los Angeles have a fixation and focus on whatever is new as opposed to the fascinating remnants of the old guard. Although historically there is not much dating back past the 19th century, there are some beautifully restored reminders of our past that are worth checking out, with a considerable amount of them congregating in one area – the Historic Core District. This area is bounded by Hill, Main, 3rd and 9th Streets, and encompasses what was considered Los Angeles in the early half of the 1900s. The Core District has had its share of ups and downs and until recently was more down than up. Since the 1990s, a major effort has been under way to revitalize the area and bring back these gems to their former glory while making it a safe and fun place for people to visit. The area includes the original Los Angeles (El Pueblo de Nuestra Señora la Reina de los Ángeles del Río de Porciúncula, a mouthful to be sure) which is located to the north in and around Olvera Street, Pershing Square, L.A. City Hall, the Biltmore Hotel and old quirky restaurants such as Clifton’s Cafeteria, and the French dip warriors Cole’s and Philippe. There is no way I could do a single article highlighting all the notable points of interest in the Core District, so I’ll focus on a single block between Broadway, Hill, 3rd and 4th Streets (a very short walk from the Pershing Square Metro station, and with plenty of street parking). 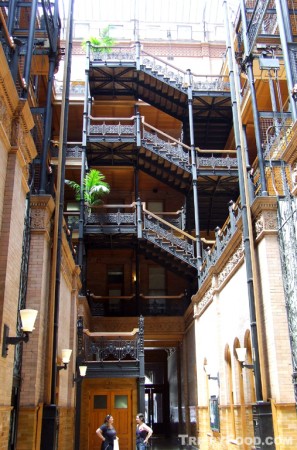 The sky lit atrium of the Bradbury Building

We’ll start our tour on Broadway; from the middle of the east side of the street (looking towards the intersection of Broadway and West 2nd Street) the magnificent architecture of the Million Dollar Theater and the Bradbury Building dominate the view. From the outside, the Bradbury seems unfamiliar, but once you pass through the beautiful bare wood doorway you will immediately recognize it from countless television shows and movies (the most popular being Blade Runner – ironically, architect George Wyman designed the building inspired by the 1887 science fiction novel “Looking Backwards”). Built in 1893 at a then-astronomical price of around $500,000, the building had fallen into disrepair over the years but has been lovingly restored to its original grandeur after being given landmark status in 1977. The sky lighted atrium is breathtaking – the tile walls give way to each of the floors, which are decorated with wrought-iron railings and wood accents and ceilings; an open wrought iron cage elevator takes occupants up to the 5th floor. Although the building is filled with occupied offices, visitors with business in the building must check in with the guard; all other visitors are only permitted up to the first level. 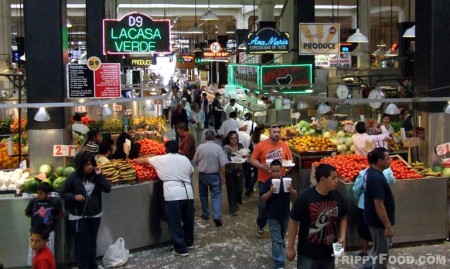 Directly across the street is one of the oldest movie palaces in the United States, the 1918 Million Dollar Theater. The theater was built by Sid Grauman, who is probably better known for his Chinese Theater in Hollywood featuring stars’ hand and footprints in cement. Through the 1940s the theater featured popular live acts of the day along with movies; in the late 40s, it became a center for Spanish language entertainment. The theater was closed for several years but recently renovated and re-opened once again as a Latino entertainment center. To the left of the Million Dollar Theater in the same block is Los Angeles’ famous Grand Central Public Market. Built and operating since 1917, it is the definitive place to get fresh produce, meat and specialty items or hard-core ethnic cuisine. During operating hours the Broadway and Hill Street entrances are fully opened giving the indoor market the appearance of an outdoor bazaar. The cement floors are covered in sawdust, and it’s not unusual to see a pigeon or two wandering around inside (trying to avoid ending up in butcher paper, I imagine). One of my personal favorite stalls goes by the odd name of Roast to Go. The stall wears its menu on its sleeve, with their food displayed prominently in steam-covered glass cases, but it’s their unusual Mexican offerings that make it one of my favorite places to get a bite in Los Angeles. The menu features lengua (tongue), hog maw (stomach), pork snout, beef cheeks and more – I couldn’t resist the temptation of the tongue rising from the tangy depths of a sauce filled tray and ordered one lengua and one hog maw taco. There couldn’t have been two more different tasting meats – the lengua was tender and fatty and worked well as a contrast to the traditional taco fillings; the hog maw had a firm and chewy consistency and a delicious flavor that would be difficult to describe as porcine. Farther down at Maria’s Seafood I found something I hadn’t had the pleasure of trying previously – charales. Charales are tiny freshwater fish from Mexico that are battered and fried whole, then eaten as a snack or in tacos. I decided that a taco was in order, and the spicy, crispy fish were the perfect complement to the cool tomato and lettuce. 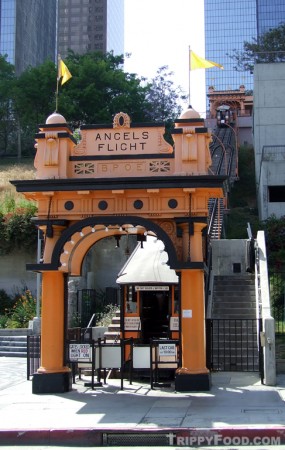 After chowing down on any of the traditional “food of the people” at Grand Central Market, take a walk out the Hill Street entrance and cross the street to one of Los Angeles’ hidden gems, Angels Fight. The funicular (similar to Pittsburgh’s Monongahela and Duquesne Inclines) has the distinction of being the shortest railway in the world (with a good arm you could throw a stone from one end to the other of its 298-foot length). The railway was built in 1901 and continued operating through 1969 when it was dismantled for redevelopment of the land it was on (half a block from its current location). It was moved to its current location and reopened in 1996 connecting the Core District at Hill and West 2nd Streets with the modern Bunker Hill California Plaza, and was registered as a historic landmark in 2000. Angels Flight was closed after a fatal accident in February 2001 when one of the cars reversed direction and sped to the bottom and crashed, killing an 83-year old passenger. After 9 years of rebuilding, installing safety features and thorough testing, Angels Flight reopened on March 15, 2010. You can still ride in the original wooden cars; at 50 cents for a round-trip the brief ride on the world’s shortest railway is the best half-dollar you’ll ever spend. 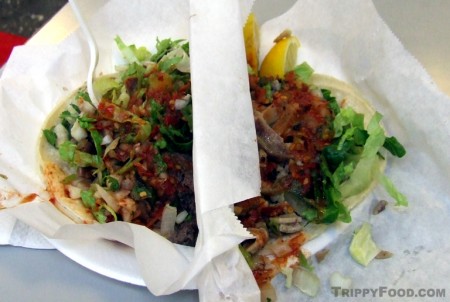 Lengua on the left, hog maw on the right

There is a multitude of other historic spots in and around Los Angeles (some of which I’ll have to cover in other articles) but I suggest you seek out and enjoy these gems before they are lost in the tide of history. To know and love L.A. requires an appreciation not just of where it is going, but where it has been. Although I’m not  as enthusiastic about it as Randy Newman, you don’t have to look far to find something to love in L.A.