Fellowship of the Ring 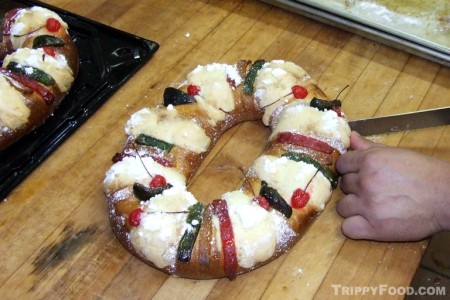 Cutting the ring for a sample

I was aware of the tradition of the King Cake, a Mardi Gras staple decorated with familiar gold, green and purple icing and hiding a tiny plastic baby Jesus like some confectionary Cracker Jack pastry where you eat the box. I was unfortunate enough to have found the baby – unfortunate because I almost lost a tooth biting down on the plastic infant. What I was not aware of is that there is a similar Mexican tradition involving a ring of bread – El Rosca de Reyes (the Kings’ Ring). Instead of consuming the bread on Fat Tuesday like the King Cake, the Rosca de Reyes is typically eaten on Epiphany (January 6), the day celebrated by Catholics as the arrival of the three kings (or wise men) to see the baby Jesus. The plastic tot is hidden inside the bread to symbolize Jesus being hidden from King Herod, who commanded that newborn male infants be put to death (when you’re known historically as a bad guy, you don’t get a bread or cake named after you). According to tradition, if you find the baby in the bread, you must host a party on February 2nd (the Catholic holiday of Candlemas Day, also known as Día de La Candelaria in Mexico) and provide the tamales. 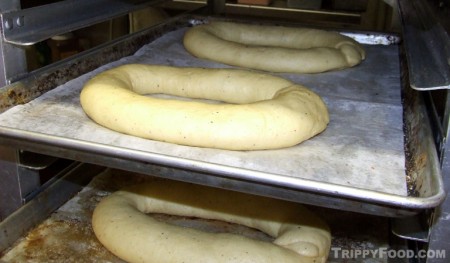 The unbaked rings rising before decorating

Many Mexican bakeries make their own regional rendition of the Rosca de Reyes, but if you want to get the bread and the masa for making the tamales you can find both at La Morenita Bakery in Los Angeles. Their masa is extremely popular between December 22 and December 24 for those making tamales for Christmas – they generally sell about 10,000 pounds of it over the three days. As you drive up to the bakery, you’ll notice a giant hopper off to the side of the building with a corn field painted on it. This vat holds the raw corn that is pumped inside and used to make the masa from scratch. Their most popular items year round are the bolillos (a type of personal French bread) and conchas (sea shell-shaped pan dulce). On the day that I visited La Morenita to see the Rosca de Reyes made, baker Alex Peña also made several trays of each, which were snapped up by people waiting in line to get the goods hot out of the oven. Peña has worked in the family business since he was a child; he put some time in for a few years as a food scientist for Bakemark, developing the skills he brought back to La Morenita. The restaurant and bakery has been open since 1957; in 1988, the Acosta family who had run it from the beginning sold it off to the Peña family who have been baking and cooking ever since. 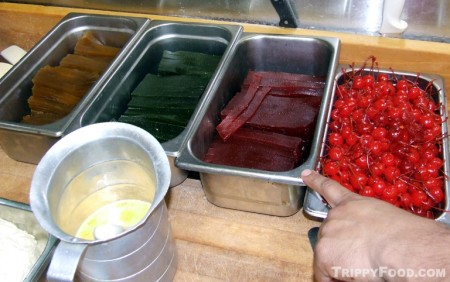 Fruit paste, cherries and butter for decorating the rings

Watching the creation of the Roscas de Reyes is like watching art being made. The dough is similar to that used for Brioche des Rois, the French version of the bread. It is hand rolled into long, serpentine strips about 2 inches or so across. The dough is shaped into rings (actually the confection is more oval shaped) in three sizes: a small one that fits approximately two per baker’s tray; a medium-sized on that takes up approximately three-quarters of the tray and a large one that covers a single tray. La Morenita makes their Rosca de Reyes similar to the traditional style of Mexico City with two differences – the addition of cinnamon to the dough, and Maraschino cherries on top instead of the traditional glazed cherries. The rings are rolled out and a plastic baby is placed somewhere in the oval. The dough is then allowed to sit for three days in the refrigerator to “ferment”; it has taken them some time to get the timing just right, working off the ratio of sugar to yeast in the dough. Prior to baking, the rings will be steamed for 45 minutes in the proofer and left to cool for a few minutes prior to decorating. 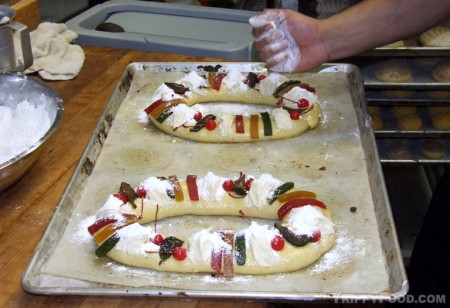 Adding the powdered sugar as the finishing touch

The dough is painted with a coat of beaten egg which gives the outside of the bread color and texture. Once the egg is applied, it’s time to start decorating. Peña starts with a paste of sugar, flour, egg and shortening, dabbing approximately 8 stripes along the top. Between the paste stripes, fruit paste approximately the length and width of French fries are laid down; there are red (guava), yellow (quince) and green (apple) fruit strips applied in their position in the Mexican flag (Peña states that if you turn it upside down the Italian flag is represented as well). Before you get your hopes up, there is no candy eagle eating a snake on top. The spaces left open are filled with cut pieces of figs in syrup and the Maraschino cherries. When the masterpiece is completed, into the oven it goes. The Roscas de Reyes are made between December 21st and January 6th, with the greatest amount sold on Epiphany. In that two week period, between 800 and 1,000 of the rings will be sold. Between the corn masa and the Roscas de Reyes, Christmas is La Morenita’s busiest time of year, although they also sell large amounts of masa during local tamale festivals. 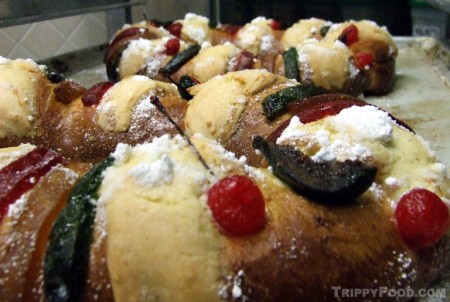 The rings fresh out of the oven

For the best flavor, I highly advise eating the Rosca de Reyes while it is fresh (Peña states that on January 6th, patrons are lined up out the door,  scooping them up still hot from the oven). The bread has a rich, spongy consistency similar to a panettone; the dough contains approximately 40 percent butter, giving it a rich flavor and although it is sweet from the toppings, it doesn’t come across as being too sugary. Enjoy it with a nice mug of some hot Mexican chocolate, but try not to dip or you may have to drag the river for the baby Jesus.

7 Responses to Fellowship of the Ring