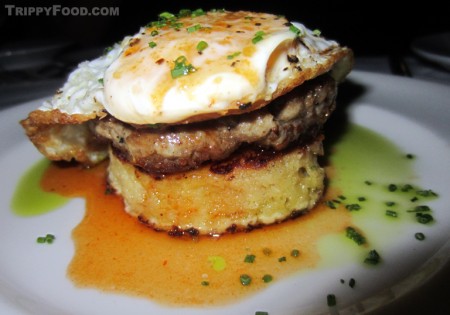 The rattlesnake mille-feuille as made on Extreme Chef

I was unfamiliar with the Food Network’s show Extreme Chef until I received an invitation to a viewing party of the episode featuring Chef Kevin Meehan, the Executive Chef at L.A.’s Café Pinot. Since the viewing was to be held at Meehan’s restaurant of residence and the menu was reported to have special items suggested by what the contestants were required to make on the show, I thought it would be up my alley – after all, the word “extreme” figured prominently in the show’s title. My imagination was working overtime trying to guess the menu – soft-shell tarantula sandwich? Emu balut? Walrus fries? We had a chance to look at the special item menu prior to the airing of the show, and although it didn’t look like the commissary list for Fear Factor, there were some otherwise exotic items that we thought may be featured on the program. We started with a round of drinks, and I opted for the Firewater (featuring top-shelf tequila, and lime rimmed and spiced with paprika). There seemed to be some aromatic unlisted ingredients as the drink was fragrant as it was tasty. We were introduced to Chef Meehan prior to ordering food and he mentioned that three of the menu items were influenced by his performance in the show, with one being as close a replica as he could recall of the first challenge. 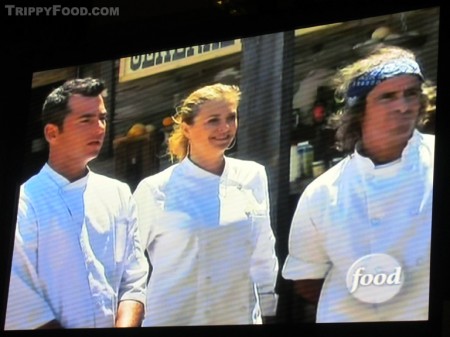 Meehan was going up against Malibu Seaside chef Gina Clarke and Executive Chef Paul Menta of Amigo’s Tortilla Bar in Key West, Florida and they were told that their fist dish required that they use a “special ingredient” located in a wooden crate. When the crate was opened, each contained several large, writhing boa constrictors and pythons seething around a burlap sack containing the first ingredient – a skinned and gutted rattlesnake. I confided to Chef Meehan that had I been on the show I would have assumed the live serpents were the first ingredient and quickly dispatched and cleaned one of them for cooking, but that’s why he is an accomplished chef and I’m just a strange man that likes to eat unusual things. The show took place in a small Old West-themed, dirt street town near Twenty-nine Palms, California and before they could start, they had to fill wooden barrels with antique utensils and cookware and roll them half a mile to the cooking stations. I’ll leave Meehan’s opponent’s creations for your TiVo viewing pleasure, but he deftly whipped up a rattlesnake mille-feuille, a breakfast item featuring a snake burger served on French toast and topped with a fried egg. Meehan’s entry (as with the best dishes in any homespun International cuisine) featured a crest of fried hen fruit (think Korean bibimbap or Colombian bandeja paisa), and the dish was lovingly recreated on the special menu.
While watching Chef Meehan perform his frontier artistry, we sat in the balmy, shaded patio of Café Pinot enjoying his creation – “You’ve seen the show, now eat the snake”. The rattlerburger had the consistency and taste of coarsely ground sausage and when combined with the rich, runny yolk of the egg and the “French toast” ends sopping up the mess I can clearly see why he left the competition in the dust. 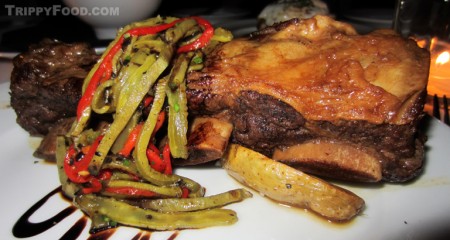 The second dish required the use of one of three western animals – bison brisket, quail or wild turkey (the avian, not the drink). Meehan chose the buffalo, and although the dish he concocted for the show was different then the special menu item, we were treated with a balsamic-braised buffalo short rib surrounded by roasted potatoes and topped lightly with a cactus salad. The buffalo was tender and pulled of the bone with little force and the meat lacked the wild taste that sometime accompanies the animal. Chef Meehan obviously knew how the show turned out, but he was as closed-lipped about the outcome as I was with my lips closed around the buffalo ribs. Other western-themed menu items included an outstanding “cowboy” burger adorned with thick slices of bacon and a pile of grilled onions. I was disappointed to discover that the patty was made of aged beef rather than cowboy but it was hot, juicy and worthy competition to most high-end burgers in Los Angeles.  The chuck wagon meatballs in chili were a little odd; the chili (which appeared to be augmented with young pinto beans) was savory and delicious, but it almost was begging for the meat to be in chunks rather than the familiar Italian globes. Layers of smoked trout sitting on creamy (but not mayo-heavy) potato salad rested on bed of greens as a contrast to the “dude ranch cuisine” theme and although simple and flavorful a gazpacho seemed to be asking, “¿Qué estoy haciendo aquí?”. 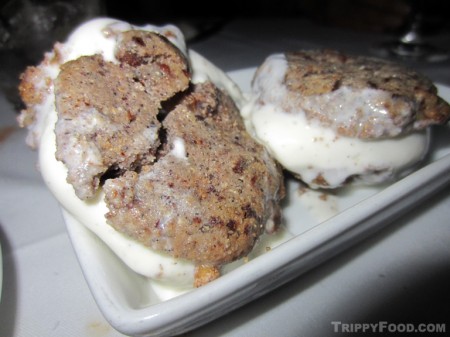 After the second challenge, one of the chefs was sent packing (obviously it wasn’t Chef Meehan, or that would have made for a short and somber event); the last challenge required the contestants to prepare a single bit of food using chicken, watermelon, dandelion and pickled eggs. The only chicken dish that appeared on the Extreme Menu at Café Pinot was a mildly incendiary batch of boneless chicken wings (which explains why they’re flightless birds); they were tangy and hot but I was wondering what the yardbird amuse-bouche might have tasted like, augmented with the dust of a western town. For dessert, Meehan had designed an ice cream dish similar to that which he made on the show (during the second challenge he was required to make ice cream in a churn with unusual ingredients and a 50-pound chunk of ice and a railroad spike). The Café Pinot dessert employed blue corn, which was utilized in the sandwich material. Visualize ice cream and a crumbly corn bread and you can almost taste what the dessert was like – funky, but not unappealing.

By now you’ve deduced that Chef Meehan aced the $10,000 challenge, and the Extreme Menu at Café Pinot is an extra feather in his cap. Café Pinot is a nice place to chill in the evening whether seated indoors or in the sunset of the Old West, and the menu prices for the viewing party were ridiculous – most items were around $8. Congratulations to Chef Meehan on both wins, and fortunately the only thing extreme we experienced while trying the show-based menu items was finding parking in downtown Los Angeles.