Drunks Along The Mohawk 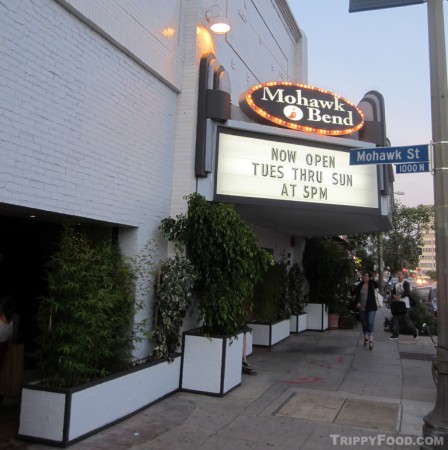 Leave it to Tony Yanow, the producer behind the hit “Tony’s Darts Away” in Burbank, California to debut his next project in the resurrection of a 100 year-old vaudeville house in Los Angeles’ hip, up-and-coming Echo Park district. His sequel features the familiar craft beer and vegan victuals synonymous with Darts Away, but the darts have been replaced with movie cultural references (if only on the menu). The space is magnificent – airy and open with a phalanx of booths running up a narrow room with the open kitchen off to the side. The kitchen is halved, with the vegan fare being prepared isolated to one side without any contact with animal flesh. On the other side of the room from the kitchen is a bar featuring more taps than a Gene Kelly film, primarily featuring local craft beers. Oddly enough, although the wall behind the long bar is populated with over 70 suds spigots, beer is ordered under a handwritten sign reading “Beer Here”. In addition to the craft beers, Mohawk Bend also features wine and spirits that are vinted by local (California) craftsmen, including several authentic wormwood-laden absinthes. 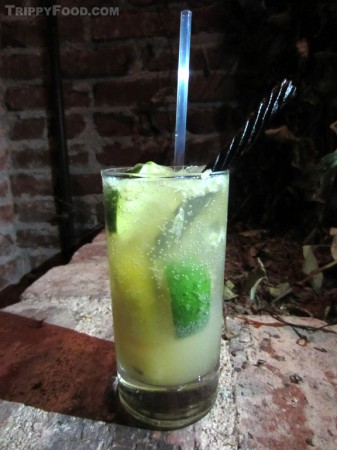 That's a black licorice straw in the Absinthe Spritzer

Yanow has populated the walls of the front of the space with a collection of vintage beer lights with not an upscale logo in sight; the walk to the massive sky lit back room is like a trek through a blue collar canyon with neon blues and reds winking their Pabst Blue Ribbon and Miller High Life electric eyes at the procession below. Walking through the portal in the 30-fot high glass wall that separates the back room from the bar area is like entering another dimension; a dimension not of sight and sound but of the mind (the mind of Tony Yanow). The tables in the back area are wisely spread out, giving more elbow room than in the joyful chaos of the bar area. Such an immense roster of beers makes choosing difficult, so I decided to forgo the beer for a cocktail; being a sucker for licorice I opted for the Absinthe Spritzer, a fizzy, citrus-laden drink sweetened with agave nectar and spiked with locally-produced La Sorciere Absinthe Bleue and finished with a black licorice straw. It was hard to tell if the drink was absorbed into the licorice or the candy permeated the drink, but the refreshing and familiar tasting concoction and the straw were gone in no time 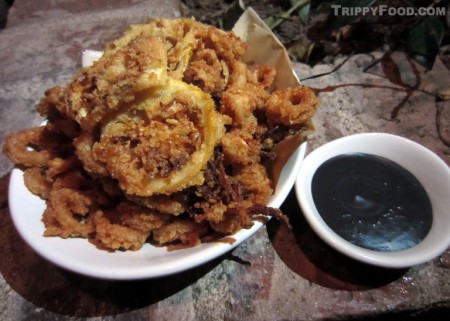 We started light with a basic flatbread complemented by three spreads: black-eyed pea hummus, a stew of peppers onions and tomato with ricotta cheese and spicy roasted eggplant. The other light plates to follow amped it up a bit – a chorizo-stuffed date wrapped in bacon smelled intoxicating, and the date melted like butter in my mouth, adding just the right amount of sweetness. The eggplant rolls were ambitious; slices of eggplant blanketed Serrano ham and mozzarella, but the skins were a bit chewy. A platter of tempura fried vegetables with yuzu ponzu were interesting in the choice of veggies, including kabocha squash, potato, carrots and peppers; the batter was light and the chips were crunchy without being greasy. 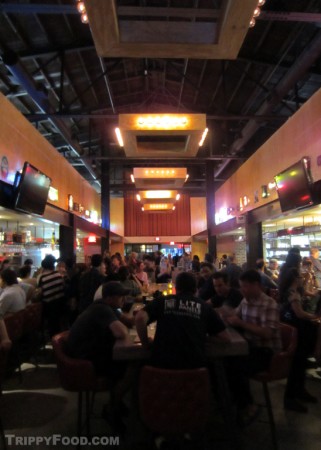 A far cry from its former life as a theater

My favorite of the starter dishes was a generous mound of rice-coated calamari. It would be a fair mistake to think some of the pieces tasted exceptionally lemony, since lemon slices were battered and fried along with the squid, and even those were tasty. The platter was accompanied by a small bowl of squid ink aioli for dipping, a unique condiment that added another layer of taste and complexity to the dish.

The salads were fresh, with crispy greens and colorful ingredients; the Flash Gordon was a mix of grapefruit, pickled red onion, avocado and pine nuts that was simply too beautiful to eat. The JJ Kale was a departure, accenting the green with garlic and chili and julienned jicama. The menu is overflowing with vegetable dishes, in part to realize Yanow’s promise of 60 percent vegan fare; this includes omnivorian fare that can be made to satisfy the needs of the most devout herbivores. Unfortunately, we decided to taste-test a couple of the meatatarian pizzas next to their vegetative counterparts and with my hindsight goggles on I would state that if you’re a vegan, order the vegan version and enjoy it (as I’m sure you will); but, if you heartily and with great gusto consume meat and meat products, order the straight-up animal version. 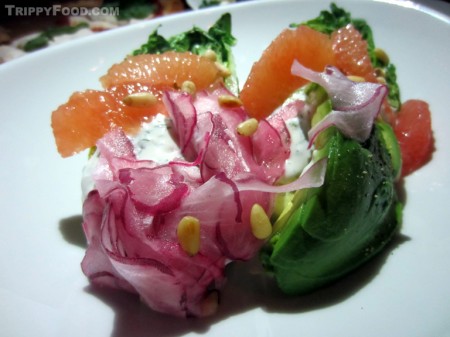 I was wondering how far of a stretch it was to take the Holy Trinity (Mohawk Bend’s version of the classic Italian Margarita pizza) and veganize it, forgetting about the cheese component. The straight-up version was simple and flavorful with the perfect texture to the crust (not cardboard and not flaccid) but I had a slight problem with the vegan mozzarella in that I thought it tasted like marshmallow. To be fair, the faux-cheese would be the perfect topping on a dessert pizza (think apples, cinnamon and walnuts), but it just hit me the wrong way. The seitan (vegan) sausage on the Able Farmin’ (the animal-free version of their Abe Froman sausage and pepper pizza) was a more admirable meat tribute; in fact, it looked more like sausage than the Sausage King of Chicago’s namesake. The vegan mozzarella on this pie was less obvious than on the Margarita, making it a vegan choice I could go with again, although the crust was a bit doughier. The peppers on the Abe were cooked down a bit but overall it would have stood up as a decent New York street slice. 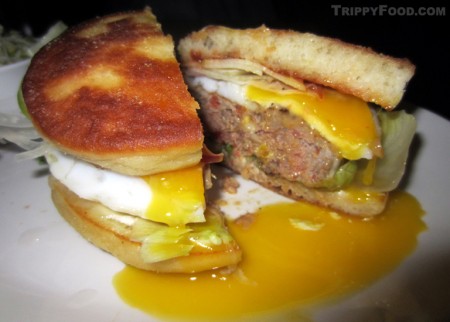 The decadent insanity that is The Dork (ground duck and pork)

The dish to beat for the evening had to be the meat lover’s portmanteau – the Dork. This thick, juicy burger paid honorable tribute to its pork and duck composition (I suppose “Puck” would not have been a good moniker for something similar in shape to object of play in a hockey game) – broken down to its basic component, the burger is clear indication that a flying pig would be outstandingly delicious. Forget the fact that this bad boy comes with options – we selected the gruyere cheese and crowned it with an apropos fried duck egg. Hidden in this haystack of burger wonderland was apple slices, fennel and pickled onion, and a side of vegan garlic aioli made the Dork a disk worth eating solo. 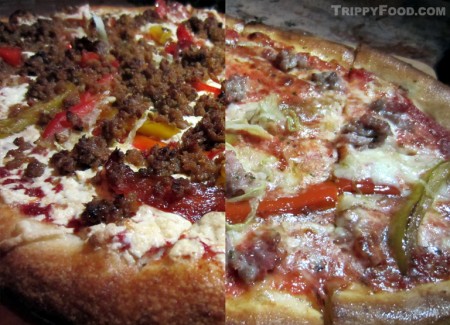 Just when it seemed impossible to consume another bite, the desserts arrived. I was willing to give what looked like a pan-fried chocolate chip cookie topped with ice cream a pass, but only because I’m not a big CCC fan – the chocolate lovers at the table dug it in a big way; likewise with the vegan s’mores, although I confess to trying the Graham crackers made in house. I have to give kudos to the berry and apple crostado made with Bisquick and cinnamon and topped with fresh sliced strawberries for lulling me out of my dessert boycott – that and a cup of coffee for me signaled the end to an orgy of fresh and flavorful cuisine. 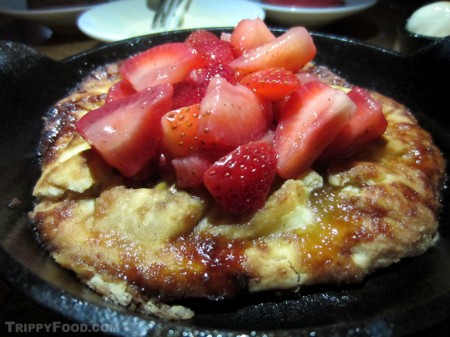 Carnivores and herbivores alike can find something to enjoy at Mohawk Bend, and the space is conducive to hanging out afterwards and knocking a few back. Mohawk Bend is already reenergizing an area of town that is quickly becoming a bohemian district, and that’s a wrap!

4 Responses to Drunks Along The Mohawk