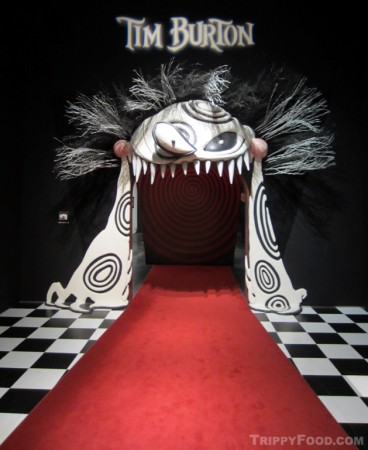 Portal to the bizarre and wonderful Tim Burton exhibit at LACMA

If Tim Burton was a band he’d undoubtedly be Pink Floyd – the nonsensical absurdity of Syd Barrett folded into the childhood angst and lament of Roger Waters. The LACMA exhibit is a comprehensive retrospect of Burton’s art from his formative teenage years (when he was drawing cartoons for advertisements and signage for the city of Burbank, California) through the art produced for and inspired by his films. The influence Mad Magazine had on the young Burton is undeniable; many of his early drawings imitated the floppy, google-eyed style of Mad’s Don Martin, with later nods to Antonio Prohias’ Spy vs. Spy with characters featuring impossibly triangular heads living in a black-and-white stark-lined world. Burton’s work can be somewhat uncomfortable to take in on a grand scale – where there is beauty, it is surrounded by pain; he creates a universe torn from the mind of a nihilistic Frida Kahlo and populated by industrial monsters. The three dimensional pieces are also stark and disturbing – a blue baby doll is geographically punctured by 60d nails; a fat, carnivorous centipede wearing a German WWII helmet wages battle; gnarled tree branches twist into botanical grotesques. 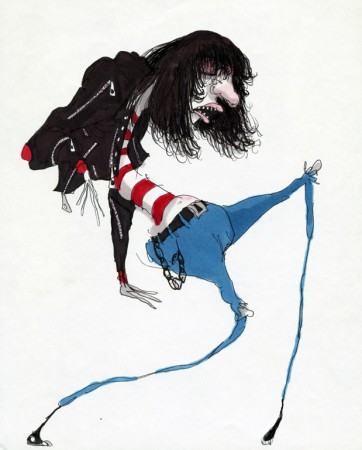 As the exhibit progresses along a chronology, Burton’s drawings and paintings take on a quality befitting of Ralph Steadman and Gerald Scarfe with dark spatters of what hints at a variety of fluids – recurring themes include psychotic clowns that make Stephen King’s Pennywise seem like Ronald McDonald and would undoubtedly make a Juggalo soil his panties; Burton’s trademark candy striper and prison uniform stripes are everywhere. A step through a black curtain becomes entry into Burton’s cinematic art, where the familiar takes over. The first item on display is a demented carousel in a black-walled room softly illuminated by UV light; the Day-Glo sculpture is similar to the headgear Michael Keaton’s wore as he ascended from the floor of the Deetz’ residence in Beetlejuice. The movie props and models draw immediate recognition – the maze winds through Large Marge’s consecutively larger eyeballs; Michelle Pfeiffer’s cat suit from Batman Returns (which lying flat in a display case has about 100th of the appeal it did on Pfeiffer) along with The Penguin’s baby pram and a series of Michael Keaton’s latex masks; a mannequin with Johnny Depp’s costume from Edward Scissorhands including a not-so-threatening-up-close bladed glove in a nearby case; and puppets and models from several films including Nightmare Before Christmas and The Corpse Bride. 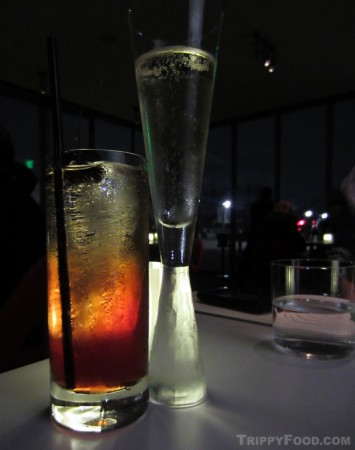 The exhibition appropriately ends on Halloween (October 31st); attendance will likely increase as that date grows closer, and the lines on Halloween will probably be longer than an Oingo Boingo reunion show. Chances are you’ll work up an appetite as you stroll hand-in-hand through the Valley of Darkness, easily remedied by a stop at Ray’s and Stark Bar on the courtyard entrance to the Burton exhibit. Burton himself helped create a drink being offered by Stark Bar for the duration of the show, the slyly-named Dr. Burton. This syrupy concoction is a blend of soda water, Don Q white rum, Cherry Heering, Amaretto Di Saronno and Amaro CioCiaro digestif, cheerfully accented with a fresh cherry and it’ll make your hair stand on end faster than you can say Jack Skellington. The first sip hits like carbonated cough syrup, but the drink becomes slowly addictive; a word of warning – like the Burton exhibit, this is not a drink for the faint of heart. 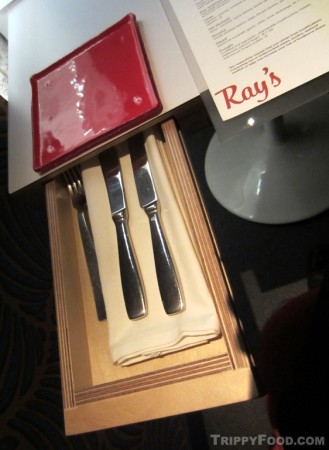 Silverware is hidden in a drawer at the table

For a while, Ray’s was offering Burton-themed menu items in conjunction with the exhibition; these included the Alice in Wonderland-inspired “Rabbit with Tea in a Mushroom Forest” featuring bacon-wrapped bunny with Mission figs, onions, chanterelle mushrooms and pistachio as well as a tribute to Edward Scissorhands (razor clams in squid olive broth with octopus and piquillo peppers over polenta). Unfortunately the ability to source high-quality ingredients was for a limited time and so the “Dr. Burton” is currently the only Burtonesque item, but the cuisine at Ray’s is itself art and worthy of attention. Ray’s itself is reminiscent of a display case; at some of the tables recessed glass cabinets hold the items from the Ellen Palevsky Cup Collection, a variety of tea cups and saucers by designers from the 1920s through the 1950s. Even the tables have an artistic slant – the silverware is tucked into a drawer built into the furniture. 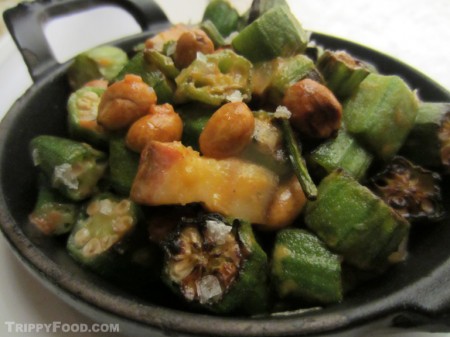 Our post-Burton dining adventure started with a curious and refreshing half-dollar-sized amuse bouche of golden watermelon gelée with miniscule cubed cucumber, Chambord and basil; plated, it begged to be lapped up but I wisely chose a spoon as my implement of destruction. A toasty-skinned ricotta gnudi featured 2-day aged ricotta gnocchi and the sage and brown butter made these fluffy bites smoky and earthy. One surprising dish as odd as a Tim Burton sculpture was an okra plate with fried peanuts, Allan Benton bacon, chili and coconut; prior to this moment, if you had told me that someone had accented okra with coconut and peanuts, I’d have told you that you were nuts, but the crunch of the fried peanuts, the sweetness of the coconut and the kick from the chiles turned lowly okra into one of the standout dishes of the evening. 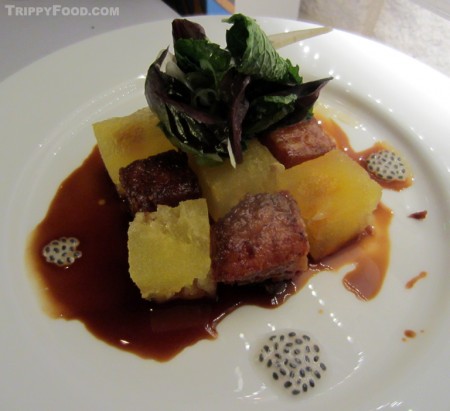 Prior to its arrival at the table, I had envisioned the marinated bay scallops in avocado crema and tomato jelly with caviar as a hopped-up ceviche, but the dish was a departure, with the sweet, delicate scallops imparting a wonderful soft taste; as ambitious as the roasted chile stuffed with venison chorizo was, the char on the pepper overpowered the taste of the deer, a feat I would have thought impossible. I had to laugh slightly when our waiter Pedro called it “chile relleno” since that’s obviously what it was, although in a very clever disguise. 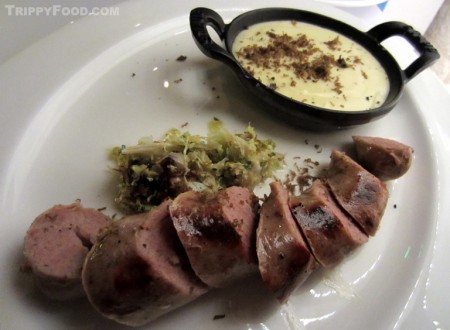 The dish to beat had to be the pork belly with golden watermelon, a creative and aesthetically pleasing arrangement of checkerboard cubes of each with a crown of basil and flanked by tiny pools of basil seeds. I wasn’t sure is I should eat it or have it framed, but after my first flavor-packed bite I was calling it temporary art. The natural black pig pork had a thin crust and a mild flavor that was complemented by the watermelon bringing out the sweetness until the chile crept up from behind with an insidious kick to the head. Disrobed, a cleverly disguised bangers and mash was discovered to be a boudin blanc accompanied by a cream-based puréed potato with truffle butter and truffle oil and what should legally be declared the new sauerkraut – a mound of tangy-yet-mild shredded Savoy cabbage. The sausage was heady with a hint of truffle and was handily sliced into segments perfectly sized for dipping in the mash. 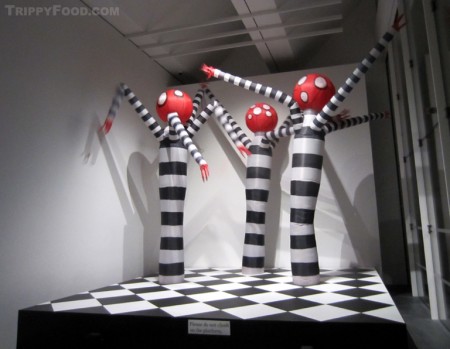 The final dish looked like the miniature aftermath of a cockfight; two denuded quail lay prostrate atop a bed of white grits in a litter of ground sausage, whole grapes and Idiazabel cheese. The grilled birds were moist as hell, unusual for poultry with not much meat, but they had been brined prior to grilling. Although this resulted in tender meat that separated easily from the bone, there was a little residual saltiness present that a spoonful of the grits neatly curbed. I was initially disappointed that the Burton items were unavailable, but the astounding culinary artistry and parade of flavors that made its way to the table more than made up for it.

The Tim Burton exhibit is visceral, bizarre and slightly disturbing but it is well worth a visit for a peek inside the mind of a creative genius and for the nostalgic value of taking a cinematic journey through his films. Tim Burton-inspired menu or not, Ray’s and Stark Bar is also worth the visit for the creativity, edginess and artistry of the cuisine. If you decide to head on down the road and check it out, be sure to tell ’em Large Marge sent you.

NOTE: Admission to the Tim Burton exhibit at LACMA and dinner at Ray’s and Stark bar was provided by organizer of the event, who did not in any way influence the content of this article.