I Am The Pumpkin King 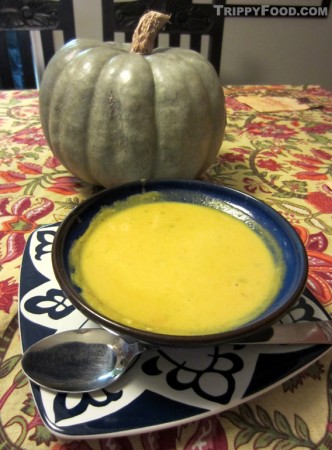 Soup from the common sweet pumpkin

Last year around this time I posted an article on pumpkin highlighting some of the pumpkin-laden dishes I’ve had the pleasure to enjoy; virtually every part of every variety of pumpkin is edible, with each variety imparting its own unique flavor. Most of us are familiar with the common Jack-o-Lantern pumpkin that when carved and illuminated from within graces many a doorstep on Halloween; also familiar, especially in the kitchen, is the sweet or pie pumpkin, that smooth, round orange orb that ends up in cookies, pies and breads each autumn. The wonderful thing about pumpkin from a culinary standpoint is that the fruit will last up to 6 months with the skin intact and stored in a cool, dry place, meaning that you can be cooking with it well into winter. Once cut, the flesh can still be used if it is steamed, boiled or baked and then frozen (usually after being pureed, the perfect state to use in baking or even for making soups or ice cream).

From a genealogical standpoint, pumpkins come from a family of fruit-bearing vines that includes gourds and squash with ancestry in the Americas. Most of the unusual colors, textures, shapes and sizes that are becoming more common at roadside stands, in pumpkin patches and in grocery stores are either older varieties finding new interest or hybrids. The familiar orange color is a result of the fruit’s high beta carotene content; although some pumpkins don’t betray this on the outside, they all show their true colors under the knife. 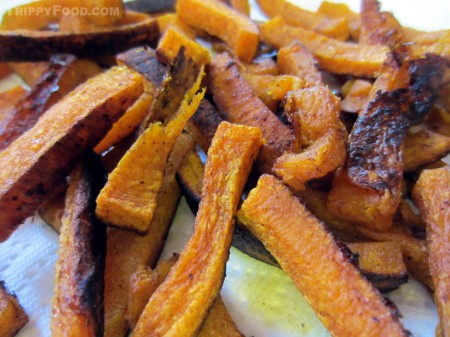 Australian blue fries with the consistency of sweet potato fries

This year I decided to work with a couple of unusual varieties based on their un-Hallow’s Eve appearances – the albino ghost (or Lumina) pumpkin and the blue-green Australian blue (also known as the Jarrahdale pumpkin or Queensland Blue depending on where they are raised). Both are from the same family (Cucurbita maxima) as the Jack-o-Lantern pumpkin, although there is little family resemblance.

I started with the gourd from Oz, which when cut had a deep orange-red color and thick flesh. Because the meat was particularly thick it was the perfect choice for pumpkin fries (although it required a considerable amount of elbow grease, and I don’t mean for frying). I chose to make them in the oven, which meant that they probably would not be as crispy as they would in a hot oil bath, but I considered baking them would preserve more of the taste and nutritional value. The cut fries were thinly coated with olive oil and then dusted with cinnamon, nutmeg, black pepper and sea salt and the result was astounding – the flavor was amazing, not quite as sweet as the pie pumpkin but definitely a wonderful and more flavorful alternative to sweet potato fries. 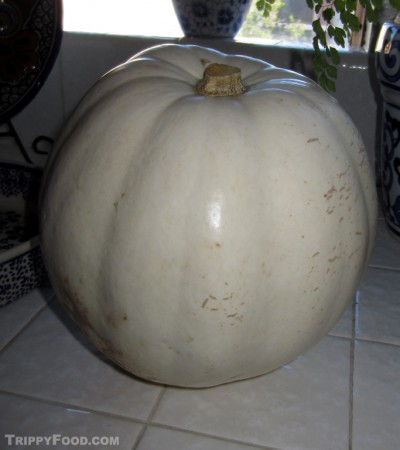 I reserved some of the pumpkin for other purposes; half of the fruit was baked inverted in a dish with about 1/4 inch of water, much the same as the preparation for acorn squash – this method is preferable to boiling or steaming as you don’t lose as much of the flavor and the result is a firmer dish similar to baking whole yams (although there was no way I was going to kill the taste with a brown sugar glaze or marshmallow). A little butter, cinnamon, crushed walnuts or pecans and a drizzle of honey is perfect for unlocking the flavor of the blue.

I prepared the Lumina using the same recipes as with the blue. Cutting the Lumina is more dramatic than the blue because of the bright white skin; the flesh is paler than the blue, showing a nearly yellow color similar to the turban squash. The seeds are clustered in little pockets that require a great deal fine motor skills separating them from the pulp; the firm meat has a strong taste, and is not as sweet as the blue, but I welcomed tasting the difference using the same preparations as before. 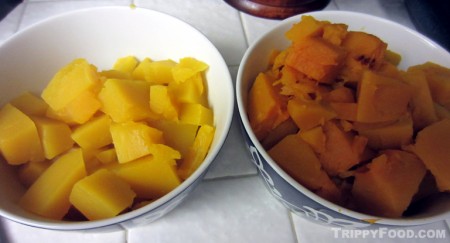 I blended some of the steamed chunks of both pumpkins together to make soup; the recipe I used called for chicken broth and so I thought it would be apropos to cook down the remainder of Thanksgiving’s turkey carcass. This is ill-advised when your turkey is fried; the spices and taste of the oil permeated the broth, which rendered the soup tasting like turkey with a side dish – not bad, if that’s your intent. I pureed the remainder for pumpkin bread and roasted the seeds from both fruits (identification was easy since the Lumina had bright white seeds).

A little bit of pumpkin goes a long way, and if you enjoy cooking with it I advise you to take a walk on the wild side and try some of the more unusual varieties for their unique flavor; who knows, you could be the next Pumpkin King.

GALLERY: See images of pumpkins and the dishes Val made from them as well as other pumpkin treats