Down On The Corner 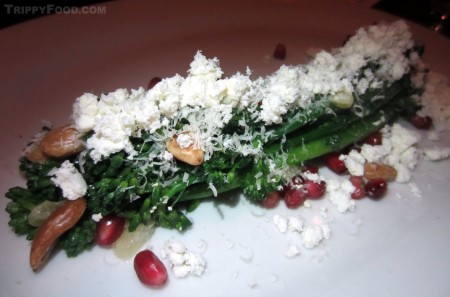 The Corner Door in Culver City, California boasts a simple, austere exterior befitting of a quiet neighborhood watering hole happy to fly beneath the radar. The young bistro is certain to get shaken, not stirred with the recent announcement that Chef Kyle Schutte will be commandeering the tiny kitchen, bringing his innovative and artistic culinary talents to the short stretch of Washington Boulevard. At just over a year old, The Corner Door is the new kid on the block, suiting up to spar with heavyweights Waterloo and City and A-Frame, and if Chef Schutte is allowed to run wild, the little bar that could will be bringing in adventurous diners from all over Southern California. 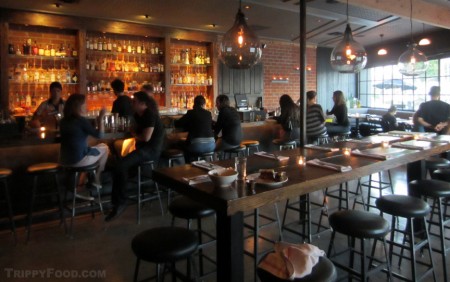 Transforming a bar into a bistro a little at a time

Mixologist Beau Du Bois already enjoys a reputation as master of traditional libations as well as the creator of cutting-edge beverages with a bar list that reads like a racing program (featuring drinks with names like “That Girl Is Dangerous”, “5 Year Plan”, and “Pencil Moustache”); the dynamic duo of Du Bois and Schutte should be unstoppable. Chef Schutte appears to be dipping his toes in the water – the chalkboard at the bar still advertises a single dish (probably frequently fried chicken), but the real transformation appears to be occurring in baby steps on the dinner menu. Some of the offerings demonstrate Kyle Schutte’s signature playfulness; the jicama tacos are beautiful trinkets of fresh color, topped with pickled mango, black garlic, feta cheese and candied lime, and finished with micro-cilantro, but the fun part is finding the jicama (hidden in plain sight as the tortilla, a tribute to Schutte’s famous “reverse tacos”. Melt-away sockeye salmon crudo is crisp and vibrant and yet the taste of the fish is muted, allowing the cucumber sprouts, Meyer lemon and pistachio to establish their flavor. While the burrata is tasty and creamy, even with the fruit and vegetables accompanying it the cheese seems to be begging for something else to complement. 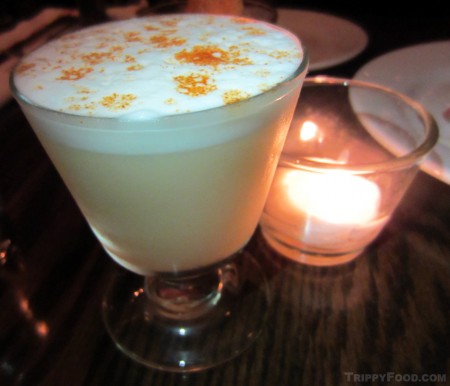 Chef Schutte’s surprise dish is the broccolini, an offering so outstanding it could convert a dyed-in-the-wool carnivore instantly. The stalks are sturdy and crisp without being raw, and the contrast in texture with the Marcona almonds and pomegranate seeds are a nice diversion; there’s a kick from flaked chiles and a sweet acid from blood orange, but the powdered olive oil that dissolves with each bite is like culinary cocaine. While “grilled cheese” seems perfectly at home on a bar menu, Schutte reimagines the sandwich chock full of tart skin-on peaches and mild pecorino cheese and the fresh leafiness of wasabi arugula.  Schutte adds subtle flavor to the sandwich by grilling with cocoa butter, destroying any pre-conceived notion of the American standard and making the dish a worthy contender for the Grilled Cheese Invitational. 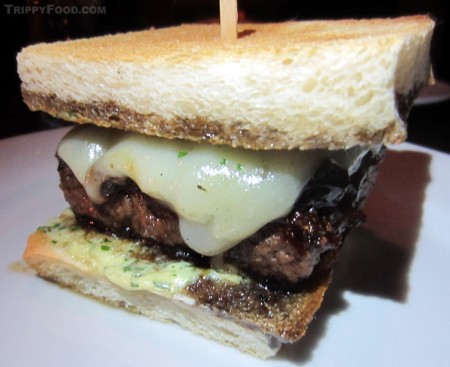 The Corner Door offers steamed mussels done Thai style with green curry and basil; here, Schutte shows some restraint and presents the dish in traditional fashion but then conceives a cilantro-stuffed agnolotti that gives a nod to elote accompanied by fresh, grilled corn, tequila and a trail of Fresno chili ash (which oddly appears to be a bit short on the capsaicin). His flatiron steak arrives on a plank dusted with toasted pastrami spice (one of Chef Schutte’s signatures) and flanked by puddles of corn puree – The Corner Door uses Paso Prime beef, flavorful enough to enjoy on the rare side. The TCD burger uses the same cattle, coarsely ground and served on Texas toast liberally spread with bone marrow aioli; accompanied with a sweet cranberry and red onion jam, the dish reverses roles, with the bread imparting the savory aspect while the flavor of the meat is defined by the jam, an odd mouthful if you’re not expecting it. 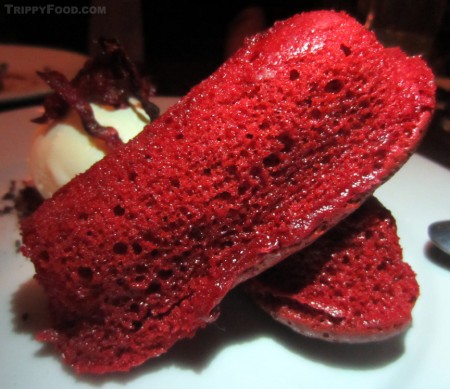 Desserts are fanciful and merry; a rich, decadent dark chocolate paloma bar gets turned around with a hint of sea salt, a tequila sorbet orb, and another of Schutte’s mad science accoutrements, a grapefruit dust that liquefies on the tongue. Chef Schutte’s masterpiece is undoubtedly the red velvet Twinkie – while the familiar shape and traditional spongy texture is present, there’s none of the gritty sugar filling that assaults the palate when typically unleashing the yellow cake from its plastic tomb. Schutte uses the traditional beet juice for color and taste and then accompanies the pastry with cream cheese ice cream crowned with crispy beet chip ribbons.

While The Corner Door’s fare doesn’t have the typical full representation of the unique gastronomic style that Chef Schutte is known for, one can hope that over time he is able to transform the menu into an adventures that shows off his unique culinary skills. Still it’s nice to know with Schutte at the helm that it’s just around the corner.