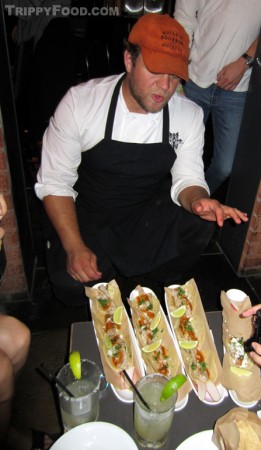 Who wouldn’t want to see Tuesdays wiped off the map, that useless pretender of a weekday nestled between the punishing, seventh level of hell day of reckoning we call Monday and the now legendary light-at-the-end-of the-tunnel, Tony Robbinsesque cat poster of a day in need of phonetic shortening – Wednesday.  Seriously, what great event ever happened on a Tuesday? Tuesday has always been a throwaway day, a veritable place holder on the calendar, until several centuries ago when Sir Isaac Newton sat at the foot of a taco stand one warm and sunny Tuesday afternoon and got socked in the head with an Ensenada-style fish taco that had fallen from the cart, prompting the great mathematician and inventor of the fig bar to leap to his feet and declare Tuesdays as Taco Tuesdays. My timeline might be a little off, but from coast-to-coast Americans have embraced this day to where it is probably one of the few things Congress can agree on.

Although Newton most likely did not invent Taco Tuesdays, everyone from Taco Bell skyward has jumped on the bandwagon offering discount tacos on Tuesdays, making it a challenge for restaurants to step up their taco game. My recent introduction to Taco Tuesdays was at the most unlikely of places – The Abbey, the preeminent gay bar that serves as an unofficial ground zero for West Hollywood’s “alternative lifestyle” culture. The Abbey itself started as a modest little coffee shop across the street from its current location back in 1991. When they initially relocated, the space was shared with a company that sold religious statuary, so naturally when that business relinquished the space, it left owner and founder David Cooley with a surplus of materials to use to transform the bar into something that looks like a cross between a Spanish-style mission and one of the halls of greater learning at Hogwarts. The property used to have high walls around it, but now is open by iron gates that give new meaning to the term “open”. Brick, stained glass and iron mix with a state of the art light and sound system to where it’s difficult to tell what decade you’re in. 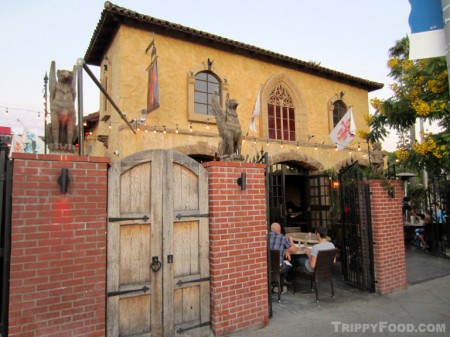 Executive Chef Daniel Emaleh keeps it simple when it comes to the tacos, but don’t expect some homage to Del Taco – although the menu lists a choice of fish, steak, pork, chicken or chile with cheese, it bears further description to reflect the quality of the $1.50 tacos. For example, most are dressed with rosemary, thyme, olive oil and cilantro; the poultry of choice is vegetarian free-range Jidori chicken, with meat so tender and flavorful it could just make you switch (from beef to poultry). The pork used for the carnitas tacos is sourced from Mangalitssa pigs, a rather odd-looking “furry” and fatty hog descended from wild boar (by far my favorite). There was the perfect amount of sear on the outside while the meat just melted away, neatly held together in the taco and complemented by a slightly salty feta cheese. 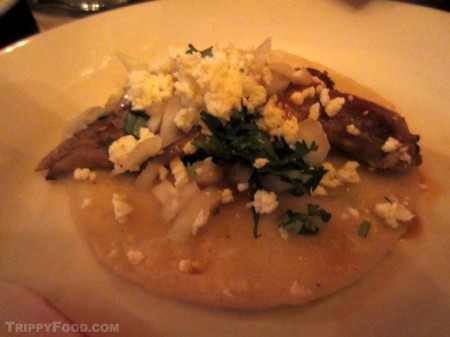 The beef is high quality and their fish tacos are made with fried market-quality ahi tuna; they also have a vegetarian (not vegan) offering that is flavorful while not disguising itself as meat. Grilled poblano chiles are topped with crumbled feta and accented with cumin, salsa verde, mushrooms and lemon juice, an unpretentious taco that even a carnivore can enjoy. Pitchers of margaritas are available as well as $10 buckets of beer, but before you go asking about top shelf or craft tequila in the margarita, remind yourself that you’re eating tacos. 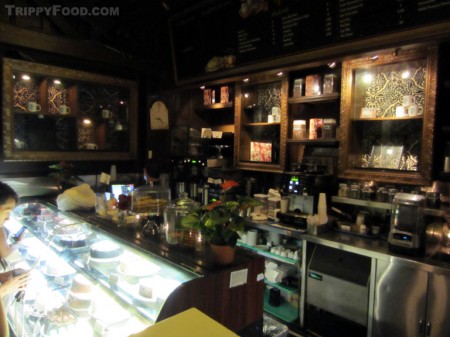 The coffee house, reminder of The Abbey's humble beginnings

If you’ve saved room for desert you can head in to the last vestiges of the original coffee shop where a display case in a wood paneled-room holds baked goods from Sweet Lady Jane. In addition to pies and cakes, there are square, chocolate-encased “ding dongs” in a variety of flavors (including red velvet), but I doubt these behemoths would fit neatly in your Batman lunchbox; they’re approximately the size of a grapefruit. Naturally you can get a freshly made cup of coffee that was the lifeblood of the original business to wash down that pastry before you check out Christina Aguilera and David Cooley’s cement prints on their walk of fame (unless they have a table sitting on top of them).

The vibe in the bar is loose and relaxed, yet the atmosphere is lively and loud, but maybe not a good choice for the closed-minded. In retrospect, I came away with a different opinion than where my preconceived assumptions led – the tacos were delicious. Thanks, Ike, we can have Tuesdays back.

GALLERY: See images from Val’s visit to The Abbey Food and Bar in West Hollywood CA for Taco Tuesday